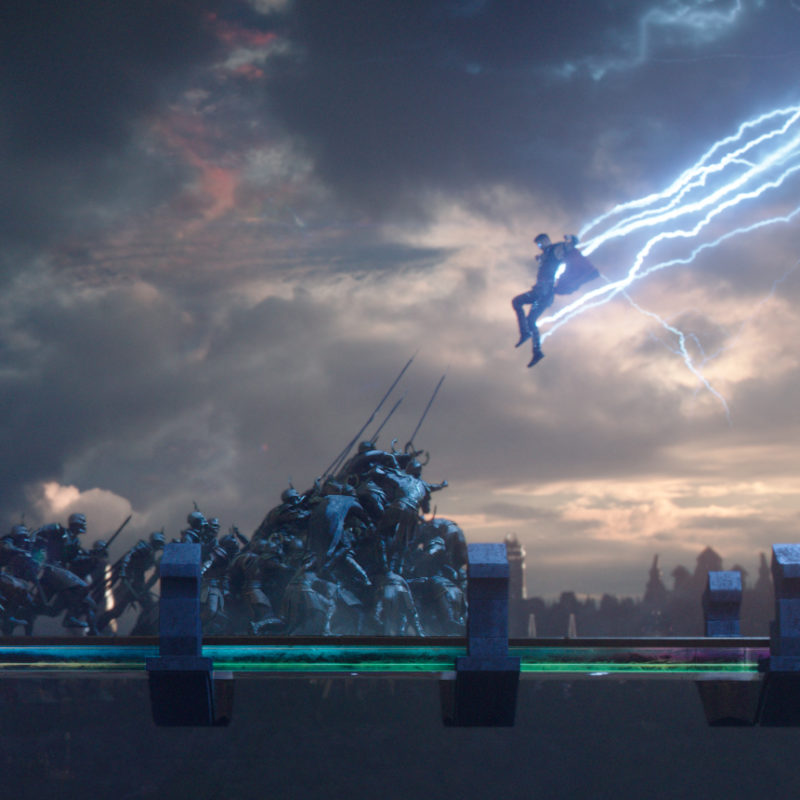 Vicon Motion Capture Cameras and Software Aided in the Creation of Undead Soldiers, Crowded Cities and Even the Hulk, All in a Matter of Days

In Marvel Studios’ latest blockbuster, Thor: Ragnarok, an electrified god of thunder fights off an army of undead soldiers high above the waters on the narrow Rainbow Bridge, as the citizens of Asgard watch on in fear. The scene is a highlight of the movie, but also a complicated one, as the script called for dozens of characters to be onscreen at once. Hiring enough extras and stunt people would be costly, so instead, Marvel turned to Oscar-winning VFX studio Framestore, which managed to produce performance motion for armies and populations in a matter of days, using only a handful of cameras and Vicon’s Shōgun software.

Having recently helped Marvel Studios bring characters like Rocket and Baby Groot to screen for Guardians of the Galaxy Vol. 2, Framestore’s assignment on Thor: Ragnarok was even more expansive. Thor’s home of Asgard needed to be populated by both citizens and soldiers, all of which had to be able to react to the shocking events around them. Hela’s undead army also had to feature creatures with the grace of a warrior and the animated attributes of a corpse. And then there was the Hulk, who Framestore depicted in two key situations: the first as he clings to a cliff after a brutal fight with the wolf Fenrir, the second as he sulks after being told not to fight.

Instead of using crowd simulation software – which would create more work for the animators – Framestore produced all of the military and civilian crowds with just two actors in a motion capture studio. Filming took place in the Capture Lab, a space outfitted with 16 Vicon cameras and Shōgun capture software, a tool specifically designed for professional entertainment projects like Thor: Ragnarok.

Framestore filmed its performers engaging in numerous actions, the majority of which were then used to create individually moving characters in Hela’s army, as well as the citizens of Asgard. To help speed up the process, Framestore made use of Shōgun’s real-time output, and recorded it direct to disk. Shōgun also allowed the team to view the performances with a mesh overlay surrounding each actor. This created a fluid silhouette alongside the skeletal data, giving the team a better look at how the movements might look, and how that performance would fit into the finished shot.

The software also automated the entire marker labeling process, from Live Subject Calibration to providing clean data within a day of the shoot. In total, Framestore completed three separate orders for Thor: Ragnarok. Each order, from the moment Marvel Studios called to the delivery of the completed data, took less than five days.

“Our performers were running around, jumping off of decks, dying, getting shot – just creating a whole host of animations,” said Richard Graham, studio manager for Framestore’s Capture Lab. “Because of the time constraints often common to our projects, it was all filmed so it could be placed right into the shot. The sequence was on a tight turn around and Shōgun helped us to take some of the weight off our animation team by allowing us to create animation vignettes that could be placed directly into shots.”

Marvel Studios also asked Framestore to create the giant fire demon, Surtur. Using Vicon optical cameras, the team set out to capture as much detail as possible, recording the scene at 240 fps rather than the standard 120 fps. By using Shōgun, the team was able to see a rough impression of how the gigantic flame-encrusted monster would look as it smashed through digital terrain, helping them make important creative decisions in the moment.

“With any big budget film that’s heavy in effects, there’s going to be a tight schedule,” said senior mocap technical director, Gerardo Corona Sorchini. “Shōgun gave us the confidence to deliver motion capture into our animation pipeline quicker than we’ve ever been able to before. That creates more options for us, and by extension, for filmmakers around the world.”

Vicon is a subsidiary of Oxford Metrics (LSE: OMG), the international software company servicing government, life sciences, entertainment and engineering markets. Other holdings include: Yotta, a provider of software and services for infrastructure asset management.

Created in 1986, Framestore is an Oscar-winning visual effects company that uses innovative talent and technology to create high-end images for all platforms. Framestore partners with clients ranging from Hollywood studios through to advertisers, ad agencies, production companies and video game developers. In addition to being recognized for its globally celebrated visual effects, Framestore has more recently made its name as an innovator in the digital space by focusing on the immersive engagement potential of interactive visual effects. Today, Framestore is one of the top visual effects and animation studios in Europe.