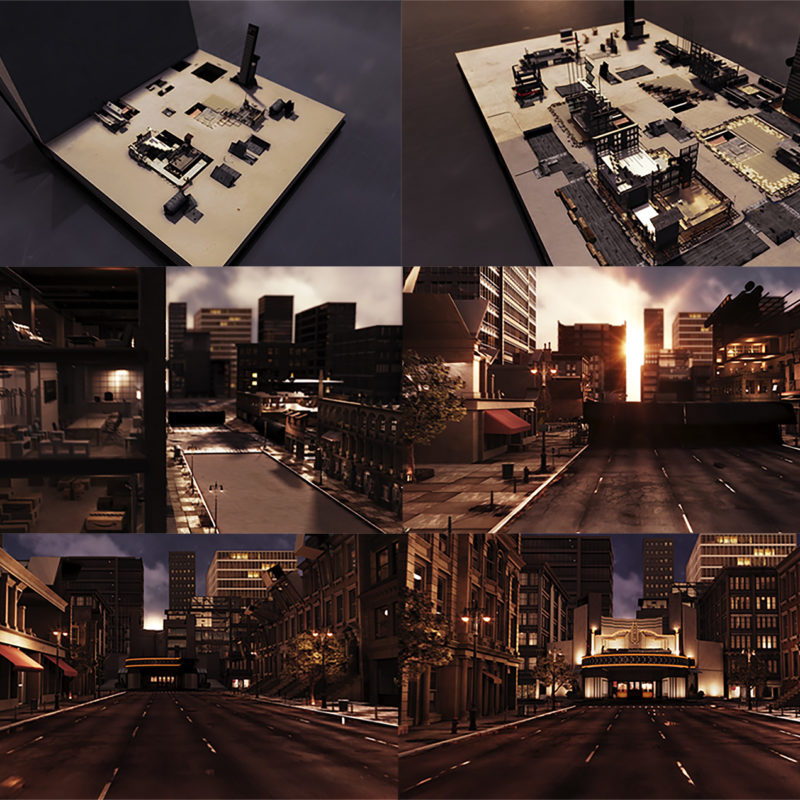 When you’re working on a big job for one of your biggest clients, you need tools you can trust. So when Amazon Studios commissioned Industry Creative, the theatrical division of the award-winning creative agency Ant Farm, to produce a full-CG animated ident to play at the head of all of its future motion pictures, there was only one choice for the work: Qube!

Founded in Los Angeles in 1996, Ant Farm is one of the world’s leading full-service entertainment and advertising agencies – creating, marketing, and distributing content for its diverse client portfolio of major brands and top entertainment companies. Industry Creative itself has pioneered some of Hollywood’s most innovative campaigns, from major blockbusters to independent movies. So it came as little surprise when Amazon Studios awarded them the job of designing and creating a new animated logo to play out at the start of all of its new films, including the two-time Oscar-winner Manchester by the Sea.

Amazon Studios’ opening logo, a 22-second animation, begins by drawing the viewer into the pages of a high-tech pop-up book. The book’s cover elegantly opens to reveal an entire miniature city block as the buildings start to assemble themselves from the ground up. As the camera travels along the street, the asphalt unrolling before it like a glamorous red carpet, it hones in on the marquee of a movie theater, on which the Amazon Studios logo is displayed.

“We pitched a very wide range of ideas to Amazon, from sculptural art to six-foot-tall stop-motion animation, but the idea of starting with a book really spoke to us,” says Doug Brandt, CEO of Ant Farm and Executive Creative Director of Industry Creative. “We are visually referencing Amazon’s origins, then showing how they are building a new film community around breakthrough filmmakers.”

“The most challenging part of the job was the volume of animation,” says Lucas Christman, Antenna’s Creative Director. “We rendered using After Effects for compositing as well as Maya for 3D, with 20 different render passes and tens of thousands of frames running through Qube! – all without a hitch.”

The culmination of a 10-year working relationship

Ant Farm’s relationship with PipelineFX began long before the Amazon Studios logo. Qube! has been utilized in production for a vast majority of Ant Farm’s projects over the past 10 years.

“We tried a number of different render management solutions and were drawn to Qube! because of its ease of use,” says Christman. “But at the same time, it’s flexible enough to handle complex workflows. It truly gives the artist the tools necessary to deliver projects on schedule.”

Flexibility is important, since Antenna uses a wide range of software in its work, including 3ds Max, Cinema 4D and Maya for 3D animation, After Effects and Nuke for compositing, plus a variety of third-party plugins and renderers.

“Of the solutions we tried, Qube! was able to provide us with the best blend of user-friendliness, application support, OS support, and technical support,” says Christman.

Qube! provides Ant Farm (and other agencies like them) with the edge they need to keep the entertainment industry’s A-list on their client list. “Render management tools are imperative for anyone doing multi-machine processing,” points out Christman. “The ability to manage resources is part of what makes companies successful.”

Due to Qube!’s winning combination of stability, customizability, and ease of use, Ant Farm is able to take on demanding high-profile jobs like the Amazon Studios ident, secure in the knowledge that the thousands of 5K frames required will be rendered on schedule, and with full artistic control.

“Qube! provides micro-level management tools in any modern render farm workflow,” says Christman. “It’s a rock-solid product and a tool that Ant Farm and Antenna use constantly, day in, day out, without any downtime or issues.”

About Qube!™ and Smart Farming™

Qube! is an intelligent, mature and highly scalable render management solution that can be quickly integrated into any production workflow, and is backed by world-class technical support. Qube! delivers intelligence to production pipelines by providing business-critical insight into render pipelines, maximizing investment in rendering infrastructure and automating manual processes. Qube! works out of the box with all leading content creation applications and is truly cross-platform with all software components available on Windows®, Linux®, and Mac OS®X operating systems.