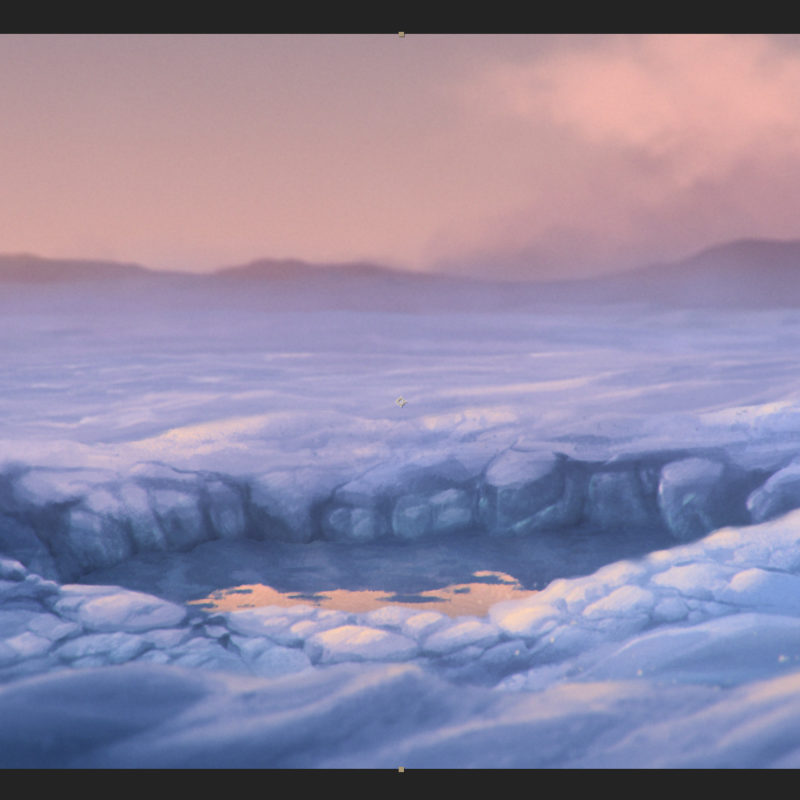 Today, e.d. films debuted the first teaser trailer for Giant Bear, giving Annecy audiences their first look at one of the Inuit world’s greatest legends. Centered on a confrontation between the last monster bear and an Inuit hunter, Giant Bear is a chilling short that brings an ancient story out of the North.

In Giant Bear, we follow a hunter in the depths of starvation. The snow is thick, his dogs are mysteriously dying and food is nowhere to be found. A quest for answers leads him straight to a nanurluk, an iceberg-sized bear, setting up a “kill or be killed” battle that pits one man’s wits against a fearsome foe.

Due to the regional significance of the story and its lessons about strategy and skill, the film has undergone rigorous review at the hands of a committee of historians and Inuit protectors. This oversight helped e.d. films create culturally approved representations of key artifacts, like the hunter’s clothing, sled, knife and igloo at a very nuanced and realistic level, ensuring a film that is both entertaining and respectful.

Giant Bear is the result of an experimental process combining 2D/3D tools with game engines. Determined to create an unusual look, e.d. films imbued its shots with a hand-drawn feel by illustrating directly onto the film’s 2D environments and 3D models. The artists then agitated the edges, putting their assets into near-constant motion through a computer script that gave the film its painted feel and a dreamy sense of being out, alone in the Far North.

“We wanted the film to feel alive and moving, like a painting come to life,” said Daniel Gies, Giant Bear co-director. “By prototyping our scenes in Unity, we were able to see how different choices would change the story before we started applying our effects. On paper, a mish-mash of animation styles shouldn’t have worked, but thanks to modern tools, small teams like ours are finding new outlets for our ideas.”

To take full advantage of this new pipeline, e.d. films used its in-house tool Scene Track, a production-grade Unity-to-Maya exporter released in March as a free plugin. After the layouts were imported, artists could test their ideas in real-time as if they were playing a game, making strategic choices before bringing animated content back into Maya for further developments. Thanks to this evolving method, a four-person team is on track to finish the production process in under six months.

Giant Bear is currently undergoing a final polish, with VFX-style particle and atmospheric effects being added to every shot. Over the summer, an all-women design team will also be producing the film’s sound mix, adding tones through a live soundscaping session and voices via traditional throat singers, connecting the film even deeper to its Inuit roots.

Several of the production elements used to create this film will be available for purchase in the new e.d. films store, including the hunter’s sled model and the still-to-be-created sound effects. Scene Track can be downloaded now, along with the various snow particles used to create the short’s winter effects.

This film was co-produced with Iqaluit-based Taqqut Productions and funded thanks to the help of the Nunavut Film Development Corporation and The National Film Board of Canada. e.d. films is seeking distribution for the 10-minute short, with a projected finish date of August 2018.

The teaser trailer is available now.

e.d. films in an award-winning animation house, digital tools lab and full-service studio based in Montreal. Founded in 2007, e.d. films has become an industry favorite thanks to its unique style and unwavering commitment to sharing its processes and knowledge online. In 2018, e.d. films launched a store to provide access to the tools it creates during its productions, including the soon-to-be-released shorts, “Giant Bear” and “Hairy Hill.” e.d. films’ reel can be seen at: https://youtu.be/cPNXCdfgA-o.