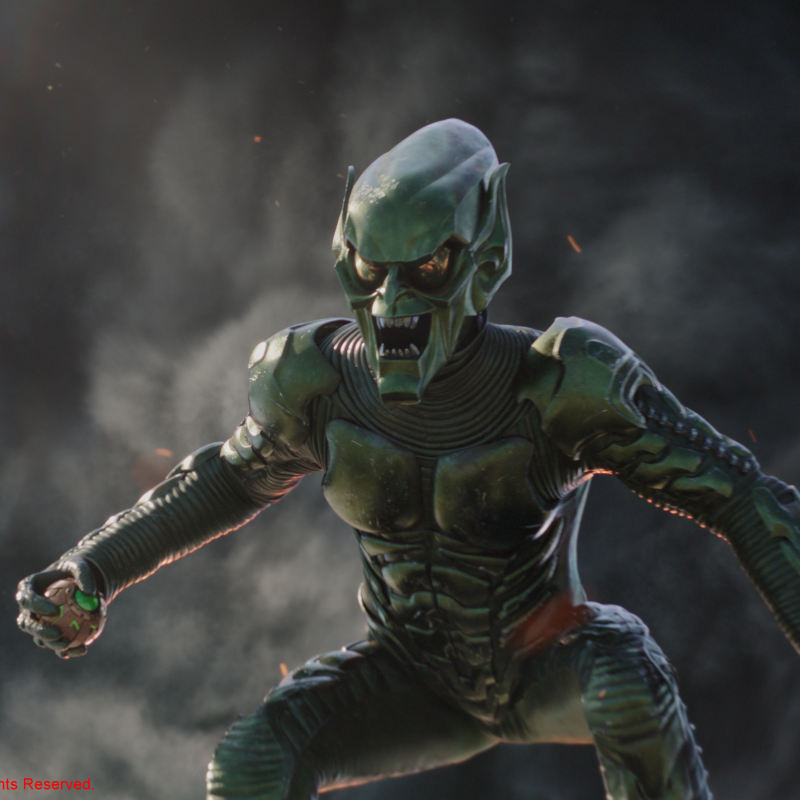 How Digital Domain Recreated 2.5 Square Miles of NYC to Introduce a New Doc Ock in ‘Spider-Man™: No Way Home’

Artists Recreated the Alexander Hamilton Bridge and All Surrounding Areas, Along with a Recreation of Times Square and a Destruction-Filled Tour Through Happy Hogan’s Condo

In Sony Pictures and Marvel Studios’ Spider-Man™: No Way Home, nearly 20 years and three separate Spider-Man franchises converge in one of the most ambitious films of all time. Building on the “Multiverse” concept introduced in the Marvel Cinematic Universe (MCU), previously established villains return with a new look, powered by more sophisticated visual effects. To help bring back one of the most popular villains in Super Hero movie history, the filmmakers brought in Academy Award®-winning VFX studio Digital Domain.

Building a Bridge to Doc Ock

In Spider-Man: No Way Home, a miscast spell introduces Peter Parker (Tom Holland) to villains from the previous Spider-Man franchises, starting with Alfred Molina’s Doc Ock. While Peter is busy working on plans for college, the displaced doctor appears on the Alexander Hamilton Bridge in New York City and turns the motorway into a warzone. For the sequence, Digital Domain had to create not just a new look for Doc Ock to replace the original mixture of practical and CG tentacles created for the 2004 film Spider-Man 2, it had to digitally construct the bridge and the city in the background, as well.

Digital Domain began by creating the environment — the entire environment. Using aerial photography, LiDAR, topographical scans and even Google Earth as reference, Digital Domain created a 3D version of New York City, as seen from the Alexander Hamilton Bridge. That meant creating digital versions of the nearby George Washington Bridge, the pedestrian High Bridge, the feeder roads leading to the bridges, railroad tracks and the visible sections of the Bronx and Washington Heights. In total, Digital Domain’s artists created 2.5 square miles of New York City to give the filmmakers total control. 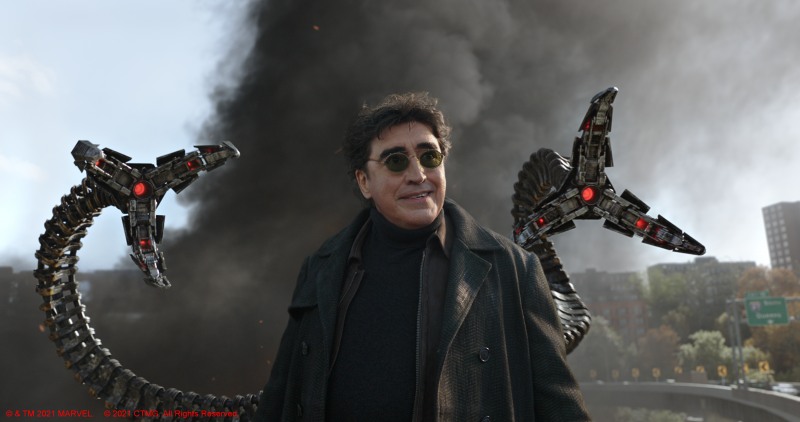 Artists then used SideFX’s Solaris to populate the countless little details that bring it to life, including hundreds of thousands of trees, bushes, rocks and signs. Artists also added the nearby Harlem River, the sky above and digital props for the set, including full vehicles that would later be tossed around and digitally destroyed. Crowds were then added using a mixture of existing digital assets and digi-doubles created by Digital Domain. All the exteriors were then rendered through Solaris in RedShift while the digital characters were rendered using Maya and V-Ray. All combined, that resulted in several shots that contained over 30 billion rendered polygons.

With the stage set, Digital Domain could then focus on the fight itself. That meant creating a new version of Doc Ock, based on the original version from 2004’s Spider-Man 2. The team at Digital Domain began by capturing facial scans of Molina, which they then used to create a digi-double that was used in nearly every scene of Doc Ock on the bridge that did not include dialogue. Artists then took scans of the physical versions of the tentacles — based on the originals — and heavily modified them to create the latest versions for the film. Each of the four tentacles were then created digitally and assigned a color. The filmmakers could then assign individual personalities to each tentacle, an idea originally introduced by Molina.

For the scenes where Molina speaks to the very confused Spider-Man, the actor appeared on set suspended on wires or an elevated platform. Artists later digitally replaced him from the head down, while adding the tentacles. Once the fighting begins in earnest, a digi-double version of Doc Ock takes over, leaving digital mayhem and destruction in his wake. 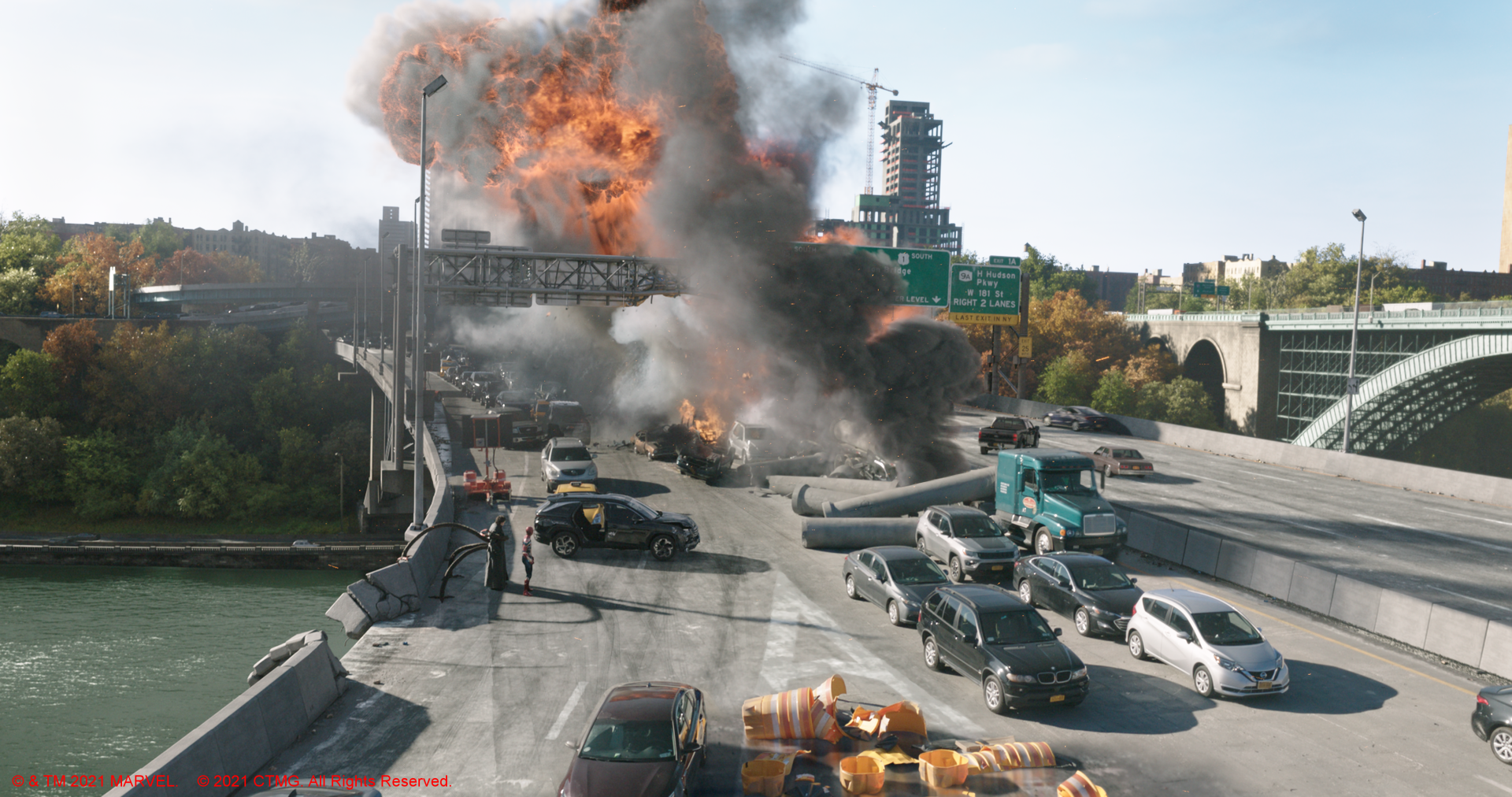 Along with Doc Ock, Digital Domain also created a digi-double of Holland’s Spider-Man, beginning with full performance capture of the actor, including body and face. On set, Holland wore a gray fractal suit covered in markers, which meant artists were able to add the metallic “Iron Spider” first seen in action during Avengers: Infinity War. The filmmakers then relied on a combination of practical effects (including both wire work and acrobatics from Holland himself), along with digi-doubles used to show Spider-Man’s superhuman strength and reflexes.

The scene then culminates with a conversation between the two characters, where the nanites that make up the Iron Spider suit are transferred to Doc Ock’s tentacles. Digital Domain worked with the filmmakers to create this key “bleeding” effect, as the nanites coat the tentacles and change their texture and color. Peter Parker’s world is then further upended by the introduction of another familiar face, the Green Goblin from the 2002 Spider-Man film. To introduce another of Spider-Man’s deadliest enemies, Digital Domain created a fully digital version of the character, starting with scans of the physical costume.

“Digital Domain is made up of incredibly talented artists and industry vets, like Kelly Port who worked on the project as the overall studio-side VFX supervisor, but we’re also huge film fans, so we understand the responsibility that goes with bringing back beloved characters,” said Scott Edelstein, Digital Domain VFX supervisor. “We created miles of city and massive battles that we think audiences are going to love. It was some of our most ambitious work to date, and some of our most satisfying as well.” 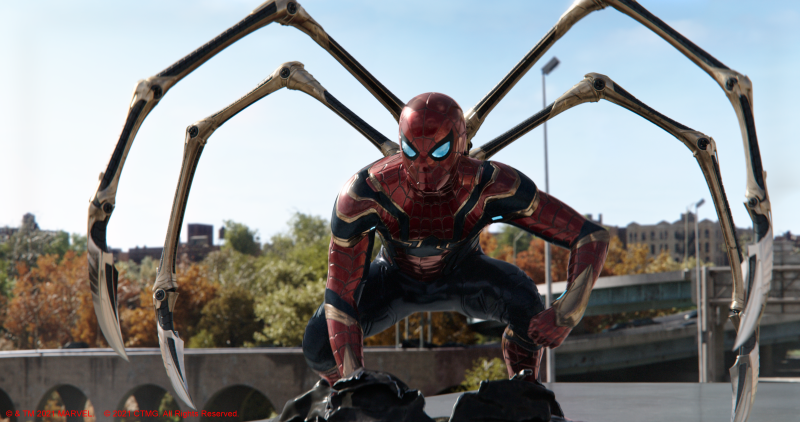 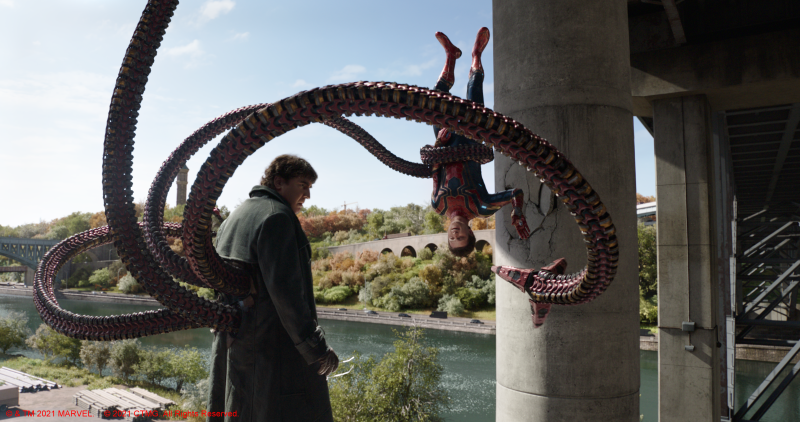 After reintroducing a familiar lineup of villains, Spider-Man invites them all to a meeting at Happy Hogan’s condo. Along with Spider-Man and Doc Ock, in attendance are Green Goblin, Electro and Sandman. To create the character of Sandman, Digital Domain based it off a facial scan of Thomas Haden Church, then the animation team keyframed the facial and body animation by hand. The face was then matched to Church’s voice performance, while the body relied on a combination of references from the director and several other sources. Artists also added Doc Ock’s tentacles, as well as a hybrid suit for Spider-Man that combines the metallic nanites of the Iron Spider suit with the cloth of his black and red suit. Things soon turn ugly, leading to a destruction-filled battle that rips through the confined building and spills onto the street.

The scene was created using a combination of bluescreen and physical sets on a soundstage, including real-world builds for part of the condo, a small section of the hallway (redressed and reused to show different floors) and the courtyard. The rest was created by artists at Digital Domain, including all the views of the street and surrounding city. In total, Digital Domain created half a city block in either direction, including the building itself (although it is based on a real location near the famed “Long Island Sign” in Queens).

The battle is heavy on superpowers, meaning the filmmakers employed a combination of stunt performers and digi-doubles created by artists. Along with the digital destruction caused by the characters battling from floor to floor, artists also worked to develop multiple options for the power effects, especially for Electro whose appearance is markedly different from his debut in the 2014 film The Amazing Spider-Man 2. Digital Domain developed several versions of his electrical powers, each showing varying levels of visual intensity, then let the filmmakers decide. The fight soon spills out onto the digitally created street, leading to Sandman and Electro combining their powers to make an electrified sand tornado, created by Digital Domain. 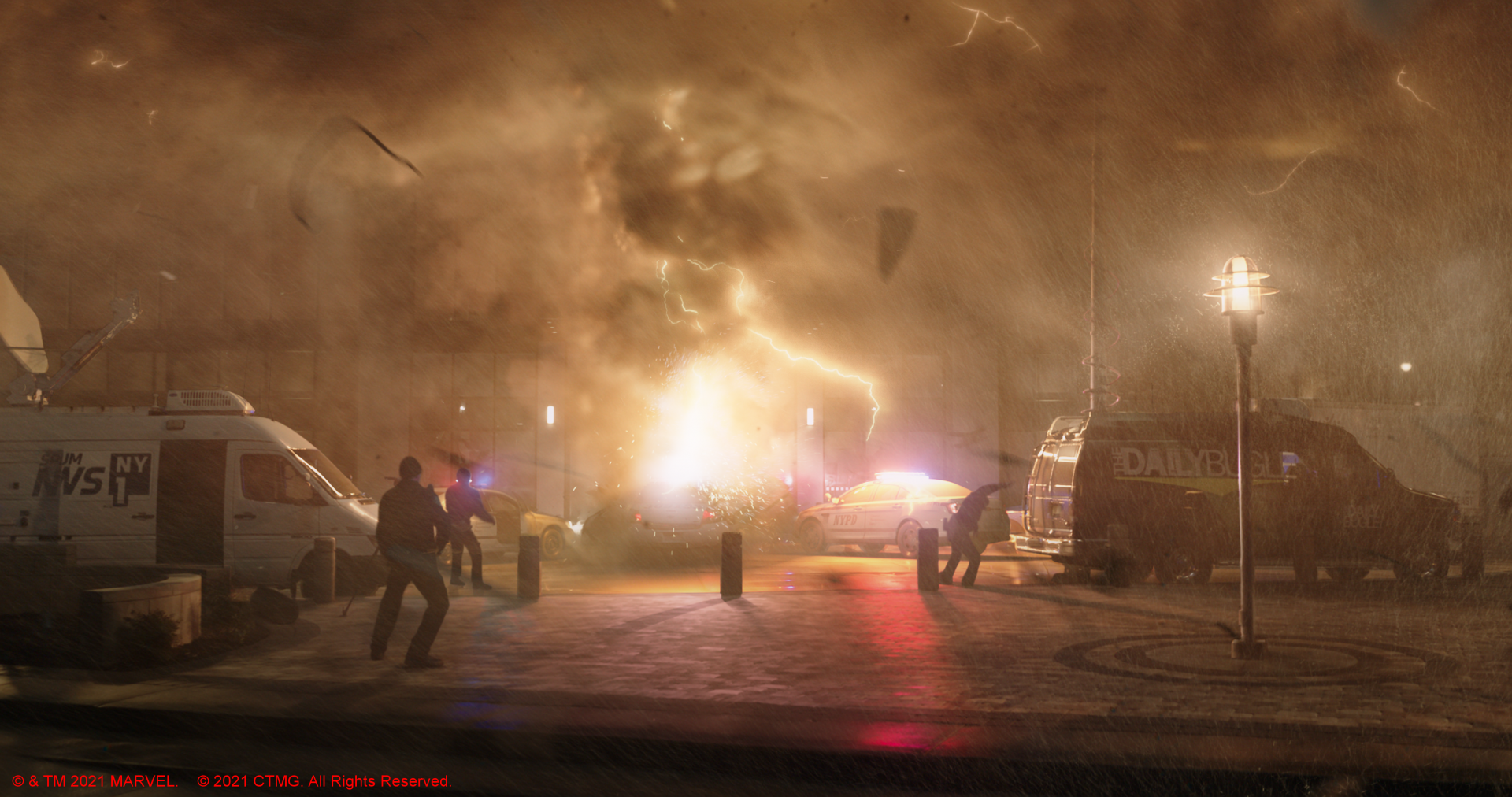 mmediately following the confrontation in Happy’s doomed condo, a battered, maskless Spider-Man finds himself in Times Square. Shooting in and above the real Times Square is impractical at the best of times, and drone photography is limited in NYC. The filmmakers also wanted to add a dramatic perspective, including sheets of rainfall and dynamic camera movements. To give the production those options, Digital Domain recreated Times Square digitally, based on real-world reference shots, then added the damaged hybrid Spider-Man suit.

“Working on Spider-Man: No Way Home was a chance for us to look over 20 years of film history and help combine it, even modernize it for a new audience and a new generation,” said John Fragomeni, global VFX president of Digital Domain. “The imagination of these studios is just incredible. We are thankful for creative partners like Sony Pictures and Marvel Studios who constantly push us to go further than we’ve ever gone, creating more impressive results each time.”

In total, Digital Domain contributed over 520 shots to Spider-Man: No Way Home, along with over 600 unique assets, including vehicles, full environments, props and more. Its artists also created 14 “hero” character builds and 19 digi-doubles for the film. Digital Domain is currently working with Sony Pictures on the upcoming Morbius, then with Marvel Studios on Doctor Strange: Multiverse of Madness, She-Hulk, Ms. Marvel and more. 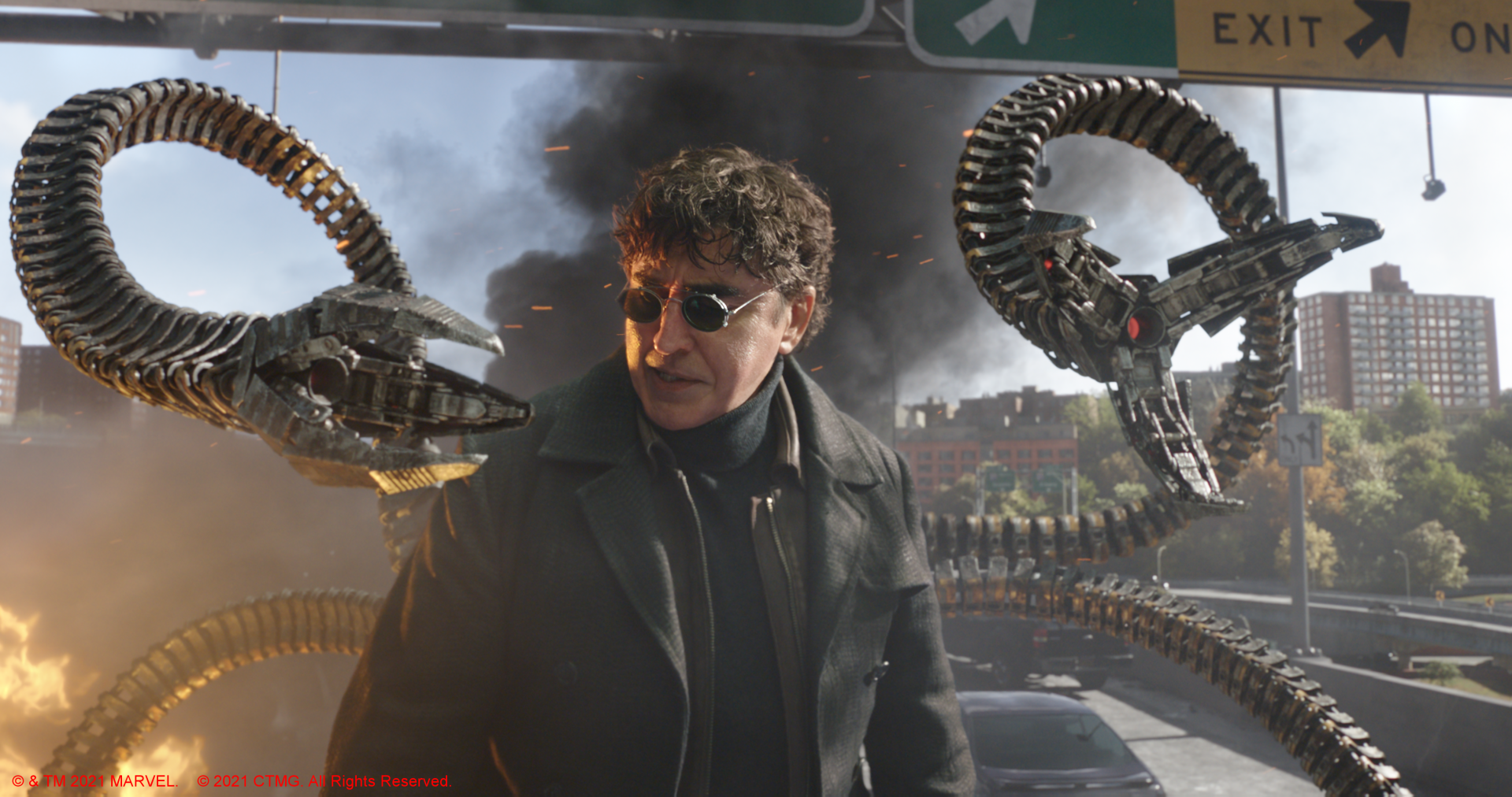 “Academy Award®” and/or “Oscar®” is the registered trademark and service mark of the Academy of Motion Picture Arts and Sciences.

About Spider-Man™: No Way Home

For the first time in the cinematic history of Spider-Man, our friendly neighborhood hero’s identity is revealed, bringing his Super Hero responsibilities into conflict with his normal life and putting those he cares about most at risk. When he enlists Doctor Strange’s help to restore his secret, the spell tears a hole in their world, releasing the most powerful villains who’ve ever fought a Spider-Man in any universe. Now, Peter will have to overcome his greatest challenge yet, which will not only forever alter his own future but the future of the Multiverse.