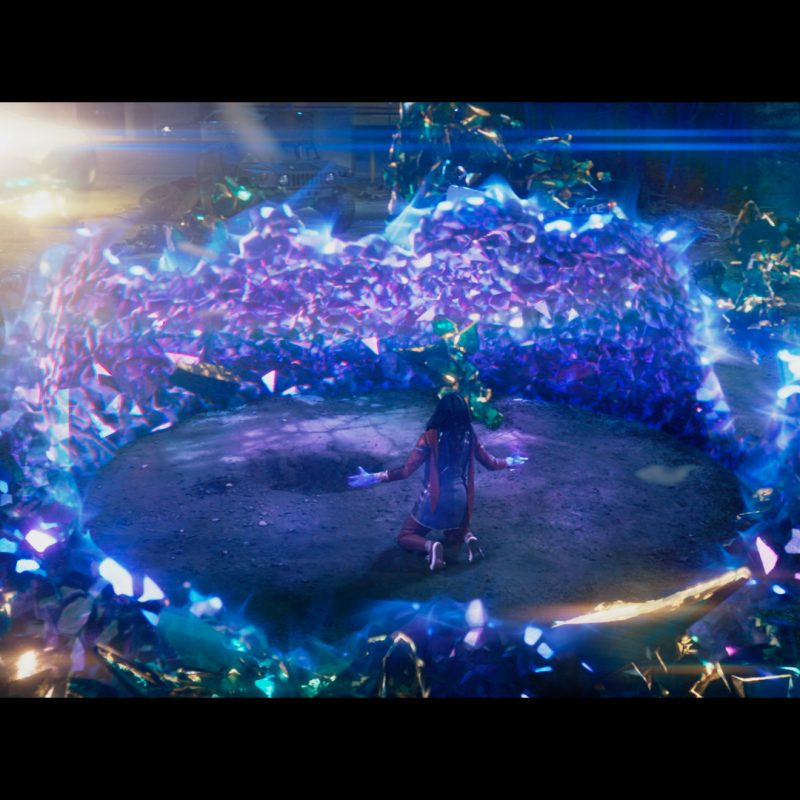 For Marvel Studios’ latest episodic series, Ms. Marvel, the production faced an interesting, and somewhat rare challenge. Unlike some of the characters in the Marvel Cinematic Universe (MCU) that are firmly established through decades of exposure, the titular character in the Disney+ exclusive series is a relatively new creation. That gave the production a little more flexibility when adapting her powers for a live-action audience, and allowed the showrunners to work with Oscar and Emmy-winning VFX studio, Digital Domain, to reinvent Ms. Marvel’s powers for a new audience.

“From the start, we knew that Ms. Marvel’s abilities were going to change for her live-action debut, but everyone involved still wanted to honor the comics,” said Aladino Debert, VFX supervisor for Digital Domain. “We went through several iterations with the production to find a balance that will impress people watching on TV, and still look great when the character makes the jump to the big screen.” 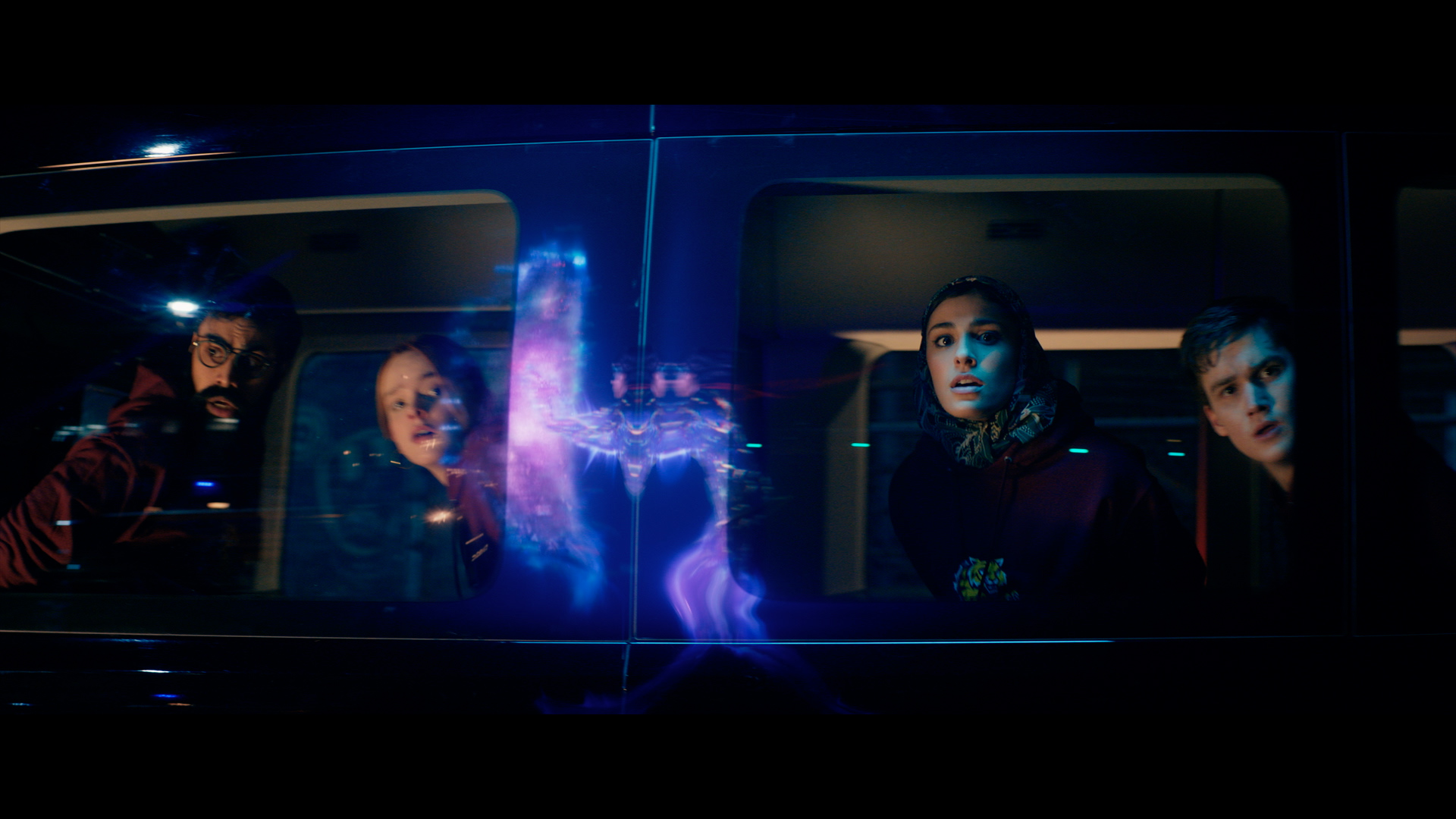 Debuting in 2013, the character of Ms. Marvel, aka Kamala Khan, has quickly become a fan-favorite, making her a natural choice to join the MCU. But rather than simply adapting her powers from the comics – which include physical elongation, growth and body morphing – the production reinterpreted her abilities to involve the generation and manipulation of a cosmic “Noor” energy, or “hard light.” That gave the team at Digital Domain a starting point.

Building on the new origins, the team at Digital Domain went through several iterations of Kamala Khan’s (played by Iman Vellani) powers to offer a look that would suggest an “otherworldly” source, while still honoring the comic history. The result was a crystalline manifestation that radiated energy, highlighted by an internal luminescence, created in Houdini. The team then began experimenting with color schemes, settling on a blue-ish purple base, which highlighted Kamala’s idolization of the character Captain Marvel, while still being unique.

As Kamala fully embraces her potential, artists refined and smoothed the look of her powers to suggest that they had become an extension of her. In a nod to her comic counterpart, she discovers the ability to shape the hard light to enlarge (or “embiggen”) herself, using light constructs to create the sense of stretching and expanding her limbs and hands. To depict the larger-than-life Ms. Marvel, Digital Domain created a giant version of the character in Maya, then finished the scene by encasing her in the glow of hard light using Houdini. 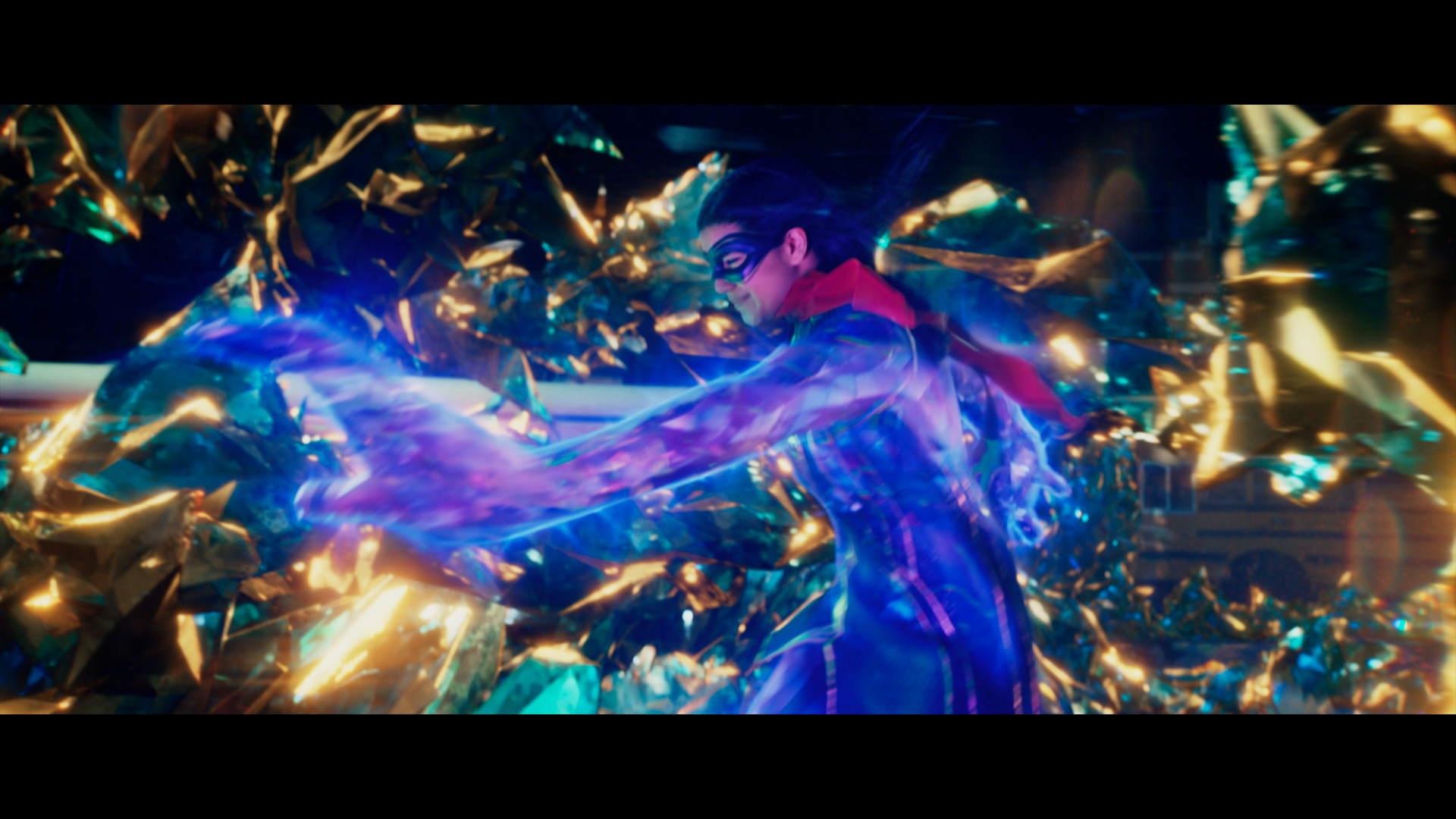 Digital Domain also handled several environments in Ms. Marvel, including a pivotal location. In the closing moments of episode four, “Seeing Red,” Kamala is accidentally transported back in time. Finding herself somewhere new, she climbs onto a nearby structure. The camera then pulls back to reveal that she is in a crowded rail station decades in the past, surrounded by dozens of trains and thousands of desperate refugees on the eve of the infamous Partition of India.

To create the multi-shot sequence, Digital Domain began with real footage of a modern-day train station with a small group of extras. Using that as a template, artists then extended the scene to create a massive sense of scale, including buildings for the station and background, and dozens of additional train cars and steam locomotives, all art directed to look at home in 1947. To create the crowds, Digital Domain used scans of a handful of actors in period-appropriate clothing, which they ran through Houdini’s crowd tool to add people to nearly every open space. Artists then added steam from the engines, before rendering everything in Mantra. 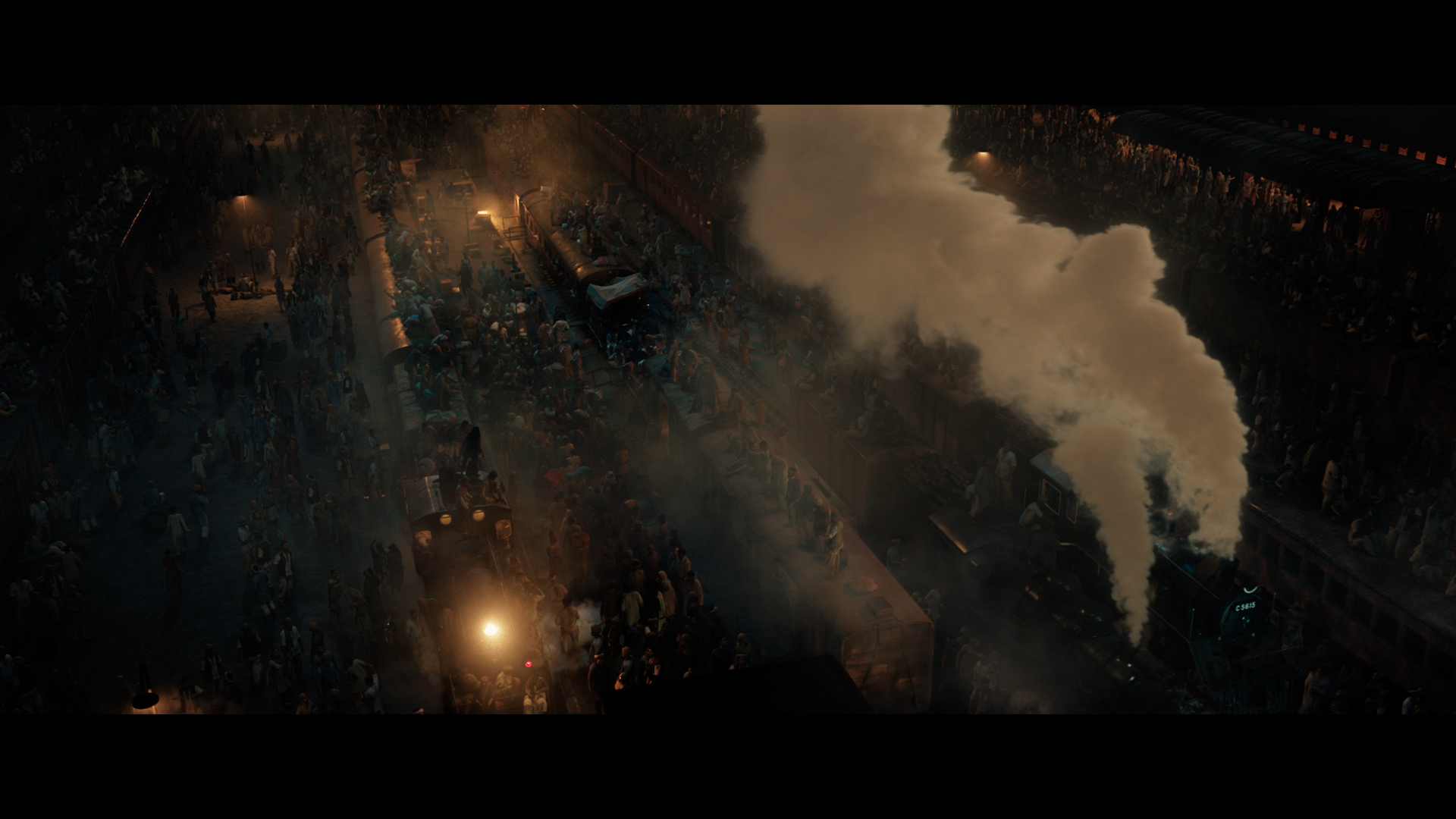 While Digital Domain contributed shots to all six episodes, the bulk of its work appears in the final one, “No Normal.” After a chase through Jersey City, Ms. Marvel’s hometown, the episode culminates in a superpowered finale that required several VFX tricks, including shape-changing characters, digidoubles, violent explosions and more.

With heavily armed agents from the Department of Damage Control closing in on Ms. Marvel and her friends, the group decides to make a last stand at the local high school and set several traps. Along with an onslaught of softballs and smokescreens, the group unleashes a devastating trap based on a famous chemistry experiment known as “elephant toothpaste .” In a real high school lab, responsible teachers tend to ensure a moderate reaction, but for the episode the heroes go bigger – much, much bigger. That led artists to create an expanding gray, bubbling CG foam substance, then animate it as it expands through the lab, through hallways and down staircases, knocking over the pursuing agents as it goes.

The confrontation soon comes down to a three-sided fight, with government agents against the similarly light-powered character Kamran (played by Rish Shah), and Ms. Marvel trying to keep them both in check to protect the crowd of onlookers. With Kamran beginning to lose control, Digital Domain was tasked with showing the damaging effects of his powers. Artists began by depicting a pulsating shockwave of energy, causing a combination of digital debris and CG damage to nearby objects. With each new pulse, his hard light powers send craggy tentacles in every direction, featuring an amber/gold coloration to differentiate them from Kamala’s powers. With Kamran at the epicenter of a growing disaster, Ms. Marvel takes the brunt of the onslaught while defending the crowd. For both visual cohesion and safety, both performers were digitally augmented with partial digidoubles. 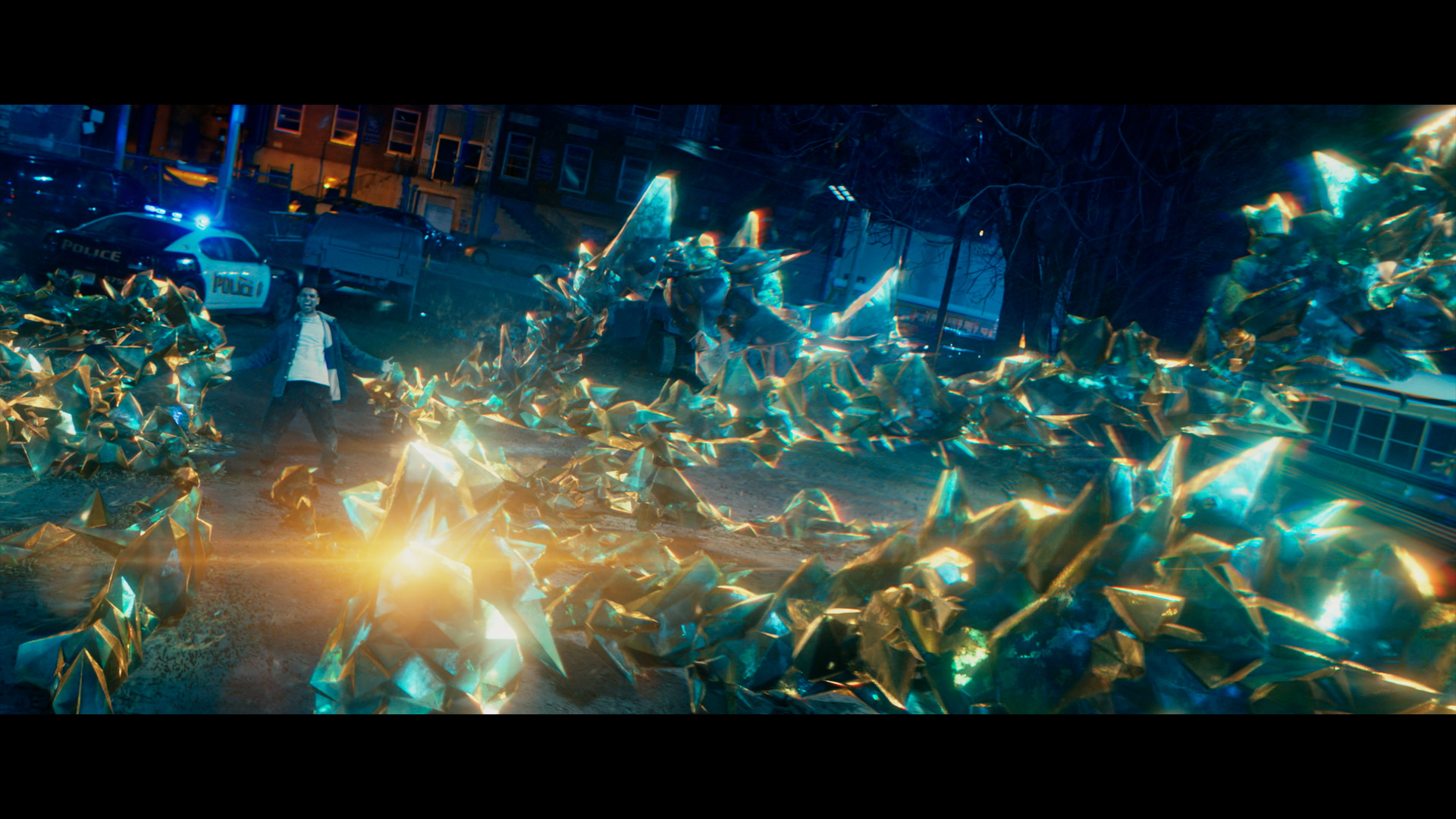 Working from full-body scans of Vellani, artists at Digital Domain created a full-body duplicate. The photorealistic doubles allowed the showrunners to place the characters in dangerous situations, while eliminating any distractions from the live-action footage – including wrinkled fabric, exposed seams and any other imperfections that might have taken away from the actual performances.

The team at Digital Domain also used digidoubles for Ms. Marvel earlier in the series, including a memorable training montage on a roof where she jumped from one floating platform to another. Artists used the technique again in the finale to depict her running above the streets of Jersey City on hard-light platforms (while obeying all traffic laws). The sequence also features a combination of clean plates and digitally-generated backgrounds to bring Kamala’s home to life.

A digidouble was also used during the closing moments of the season, in what would become one of the defining images of the show. Shortly after the final confrontation, Ms. Marvel sits on a lamppost and looks out over the city as her hair blows in the wind. To create the iconic shot, Vellani was filmed sitting on a physical light post prop surrounded entirely by greenscreens, while a wind machine blew. The water, dock and cars are all purely digital, along with the buildings on the Jersey City shoreline, which were created using LiDAR scans of physical locations in Atlanta. A plate of New York City was then added before the full sequence was rendered in V-Ray. 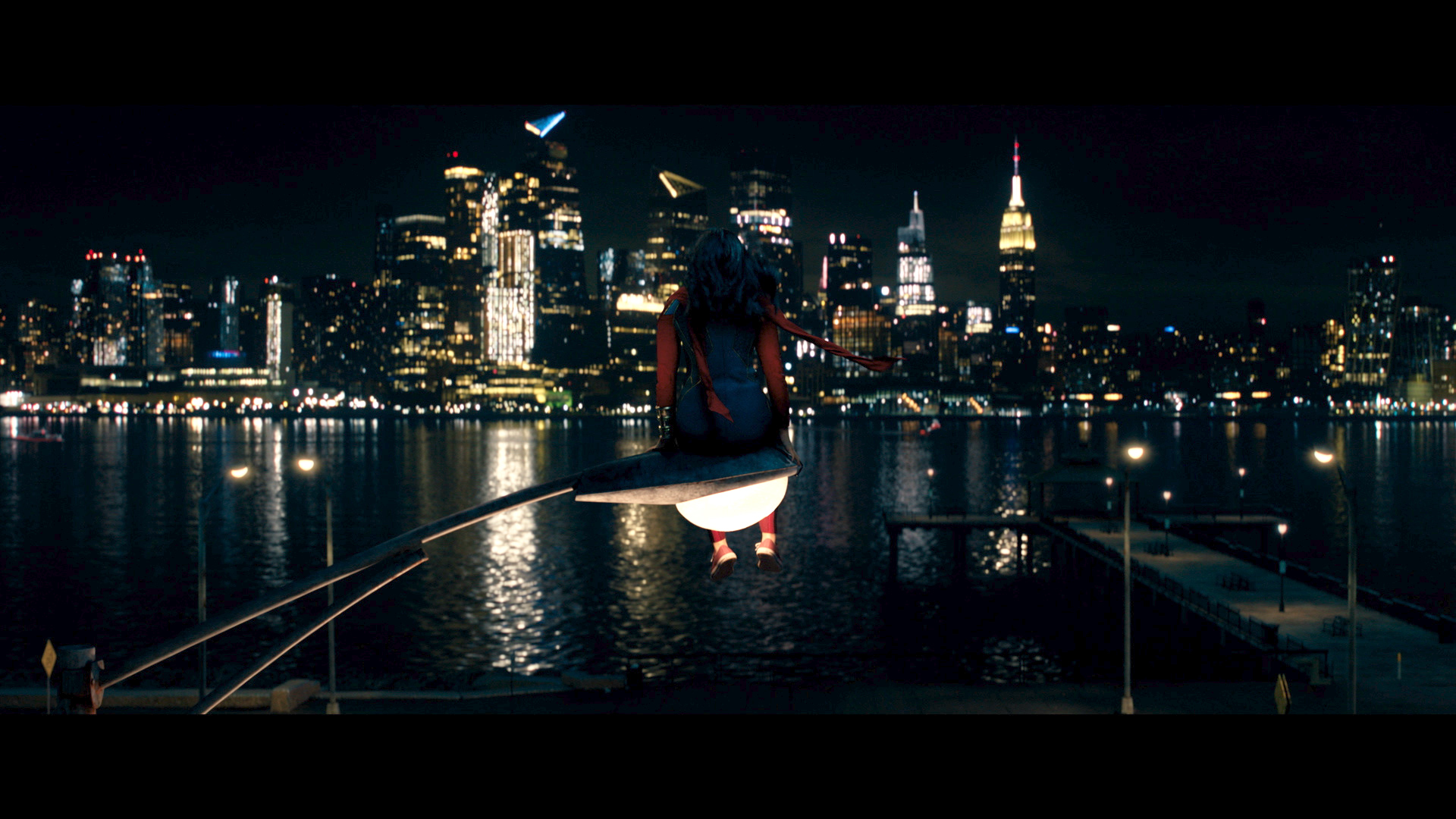