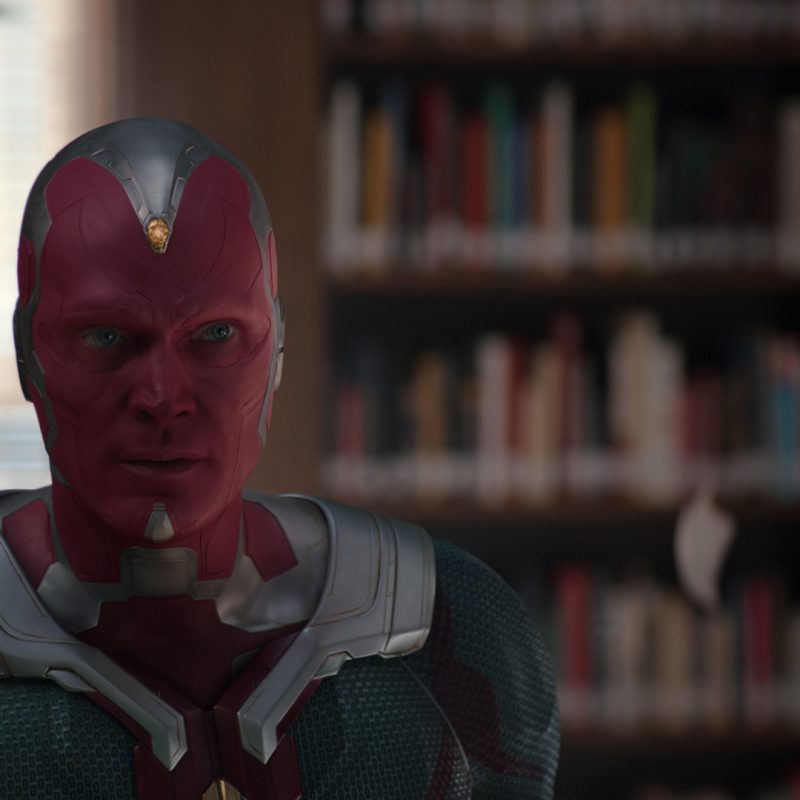 How Digital Domain Helped Introduce the World to White Vision

A Battle of Super Witches, the First Glimpse of Chaos Magic and the Debut of Scarlet Witch’s Costume Round Out Film-Grade VFX Work

In the final episode of Marvel Studios’ WandaVision, the super hero Vision (Paul Bettany) faces off against one of the most dangerous enemies he’s ever faced: himself. The battle between the “Red” and “White” Visions was a climactic moment for the show, answering one of its biggest questions in a satisfying way. The battle was not only the culmination of years of planning, it represented a new high-water mark for effects in the world of Marvel TV, courtesy of longtime Marvel Studios collaborators, Digital Domain.

“We’ve been working with Marvel Studios for over a decade, and as soon as we saw the scripts for WandaVision we knew it would be challenging and ambitious, but we were excited to play a key role in it,” said John Fragomeni, global VFX president at Digital Domain. “Marvel Studios stories demand the highest level of quality regardless of medium, so we employed the same pipeline we used on Captain Marvel and Avengers: Endgame to give audiences a real treat at home.”

Bringing Vision Back to Life, Mostly

Picking up just weeks after the events of Avengers: Endgame, WandaVision begins with mystery: Why are Wanda Maximoff (Elizabeth Olsen) and Vision living out their lives as a happily married couple in a sitcom? And how is Vision even alive? Over the course of nine-episodes, the sitcom trope moves from decade to decade, as the real world slowly begins to creep in.

In total, Digital Domain delivered over 350 VFX shots for the streaming series, the bulk of which centered on Vision. The work began with full-body scans of Bettany performing as both the Red and White Vision. New facial captures were then taken to provide high-fidelity models to work from, while keyframe animations were created to form the basis of the models used to create digi-doubles for shots where practical effects weren’t possible.

Along with the body work, scans were taken of the red and white costumes to create topology. High resolution photographs were also taken to build the textures that were then mapped on. This was especially key during the climactic fight, as the two Visions had to withstand close-up scrutiny as they grappled and flew through the sky.

“For WandaVision we had dozens of Digital Domain artists and technicians working across three locations and two countries,” said Marion Spates, visual effects supervisor at Digital Domain. “Each department coordinated with the others to ensure that everything from rigging to animation to cloth was on the same page. That gave us the flexibility to create feature-level effects in a TV timeframe without missing a beat.” 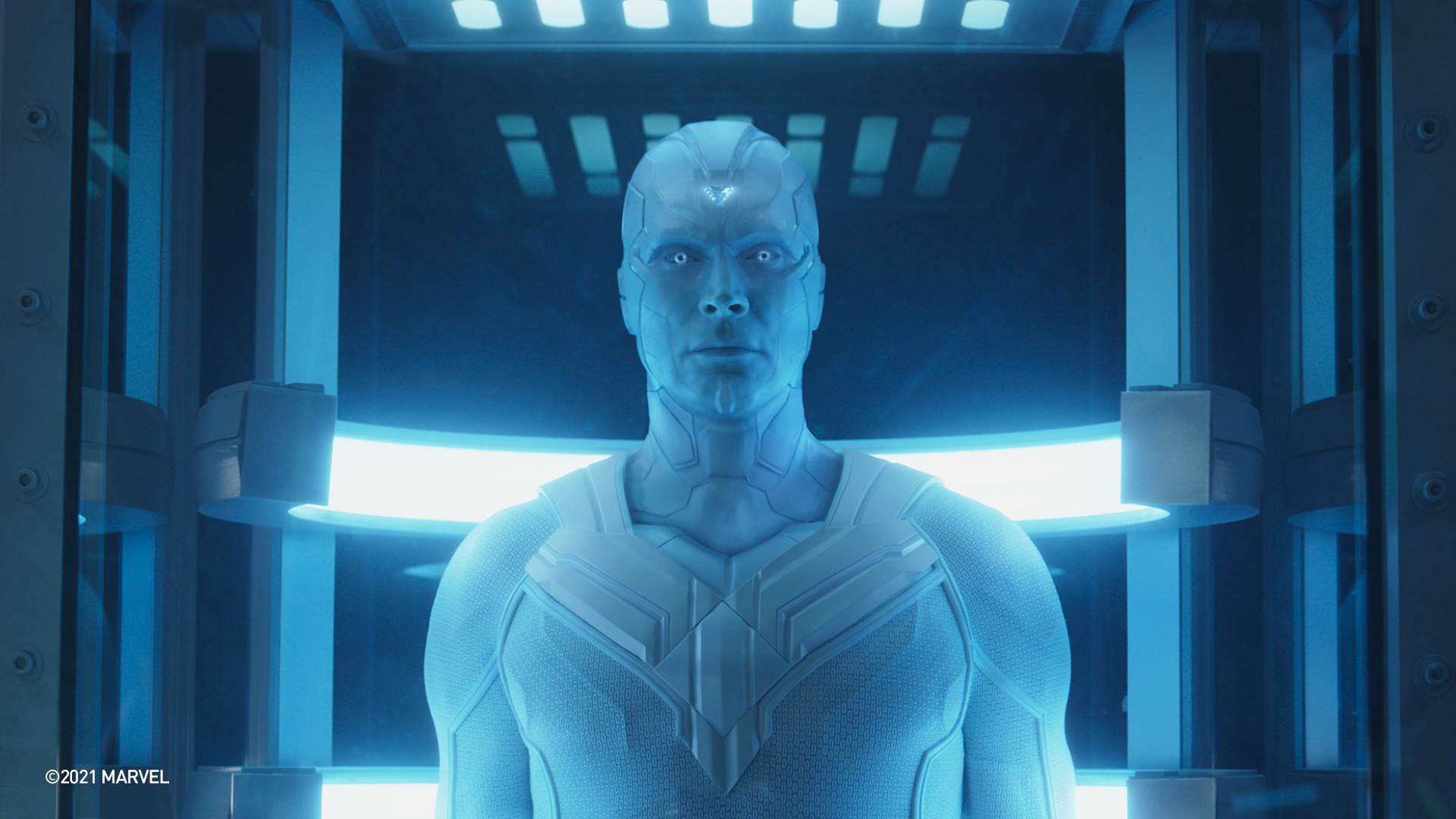 The Faces of Vision

Digital Domain’s work on Vision first appeared in the episode “We Interrupt This Program.” After confronting an intruder that brings reality a little closer to home, Wanda catches a glimpse of how Vision looked after his death at the hands of Thanos. Digital Domain integrated their CG Vision head onto Bettany’s performance, and artists matchmoved his facial performance – including eyes, nose and “muzzle” – to ensure the CG panels moved correctly. The result was a horrific look, including his recessed forehead where the Mind Stone was forcibly ripped out, leaving a divot impossible to create with practical effects.

Audiences were again confronted with Vision’s death in the episode “Previously On.” After learning that his body was recovered by a shadowy government agency, audiences are introduced to the all-white Vision, built from the original’s remains. The White Vision, performed by Bettany with digital alterations and touch-ups by Digital Domain, appears as a pale, ghostly mirror image of his former self, with inhuman synthetic eyes, a blue circuit in place of the original’s Mind Stone and a few minor alterations to the sectional components.

When White Vision arrives in Westview, a fight with the Red ensues, including an aerial duel that required a combination of practical wire effects and CG digi-doubles. For the close ups, Bettany filmed each side of the conflict, once as Red Vision and again as the White, to breathe life into two visually similar, but drastically different performances. Digital Domain replaced the stunt person’s head with Bettany’s where necessary, and integrated its CG models into each of Bettany’s plates, which were altered to make the transition seamless. The result gave Bettany a fully nuanced performance for each side of the fight.

Since his introduction to the MCU, Vision has remained one of its most powerful super heroes. Along with a powerful energy beam, he possesses the unique ability to alter his density to phase through items, or materialize inside something – or someone. During their battle, one Vision would attempt to use this ability to phase an arm or leg inside his opponent to impale them, only to have the other Vision increase its density and attempt to trap the other in place. It was a first-of-its-kind fight for the MCU, and Digital Domain leaned on a new, proprietary skin, fat, fascia and muscle solving software to make it happen.

Digital Domain’s new “muscle transfer tool” allowed artists to automatically move muscle models from one character to another, matching the shape of the outer skin. They could then deform it from the outside to help create a battle where each Vision tried to move through the other. Artists then exported Vision’s muscle model to the modeling artists, where the skin was given a high-tech, synthezoid look to highlight its vibranium nature.

With the phase battle ending in stalemate, the fight then moved to the Westview Library and a conversation between the two that will have a lasting impact on the future of the MCU. Bettany once again filmed both sides of the conversation, and using the same techniques as the fight, Digital Domain helped turn a philosophical debate into one of the most important moments in the series. Then came the Scarlet Witch. 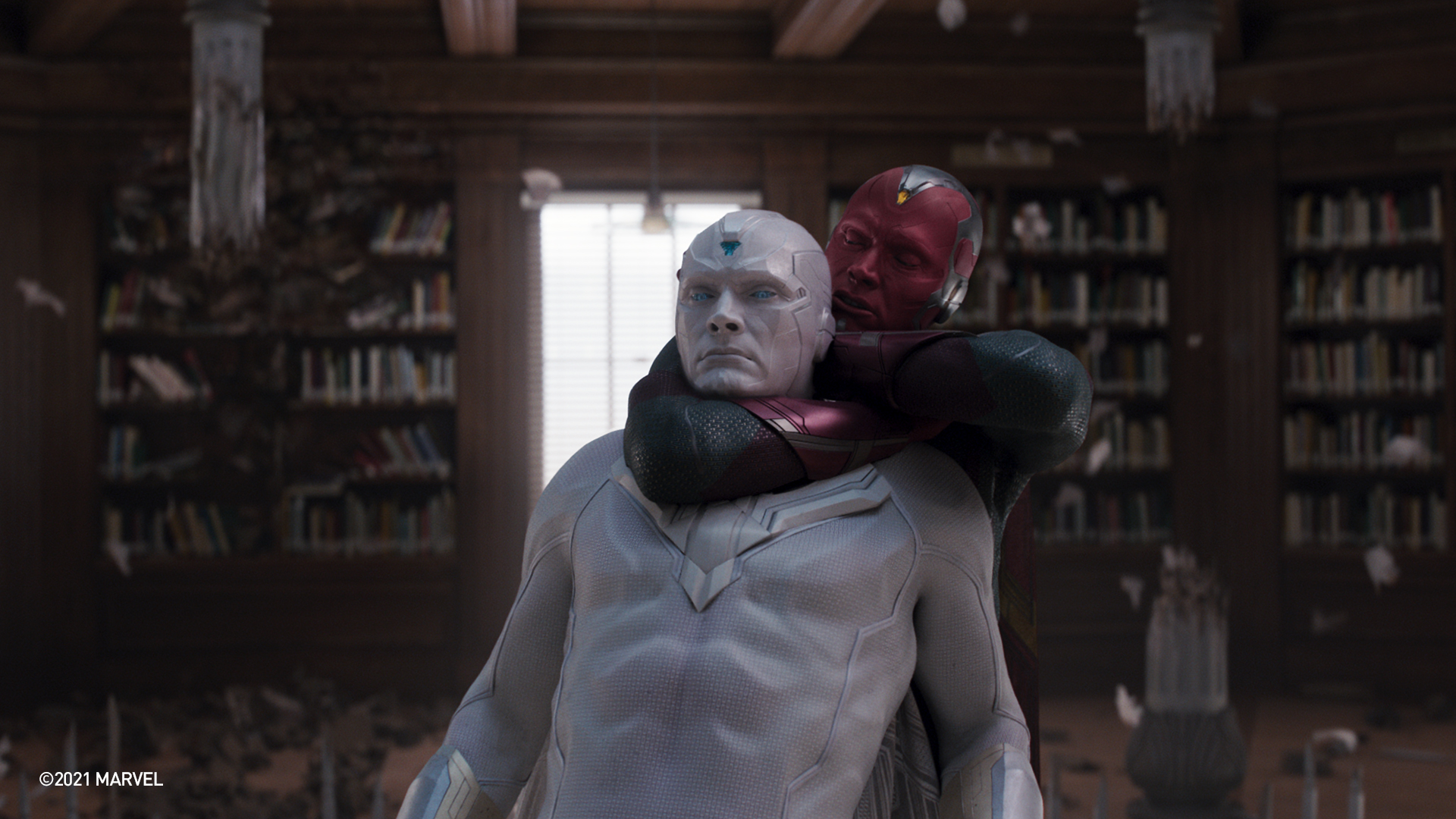 On top of its work with Vision, Digital Domain created the effects for Wanda’s fight with the witch Agatha Harkness (Kathryn Hahn) in and above Westview. As the two engaged in a super powered duel worthy of any Marvel Studios feature film, the battle saw the introduction of two new elements to the MCU: chaos magic and the official debut of Scarlet Witch.

As Wanda battles Agatha, her powers continue to evolve. Her established “hex” abilities – visually represented by a swirling bright red tangle of energy – have changed to the point where she can rewrite reality. To convey that shift, Digital Domain worked with the filmmakers to determine the visual look of chaos magic. Dozens of options were considered before selecting an effect where Wanda’s familiar red visuals gained a more sinister, darker hue, and the energy feature took on more dimensions.

With chaos magic swirling around her, Wanda then embraces her new role as the Scarlet Witch, complete with a new costume that honors the comics (in a grounded, realistic way). Working from artwork provided by Marvel Studios, Digital Domain’s artists built the costume from scans and high resolution photography, and gave it movement, helping Wanda descend from the sky with chaos magic all around. Those models then helped create the show’s final shot, as Wanda and the Scarlet Witch both prepare for the future.

With WandaVision complete and now available to stream exclusively on Disney+, Digital Domain and Marvel Studios’s collaboration continues with the upcoming Black Widow, Spider-Man: No Way Home, Doctor Strange in the Multiverse of Madness and more. 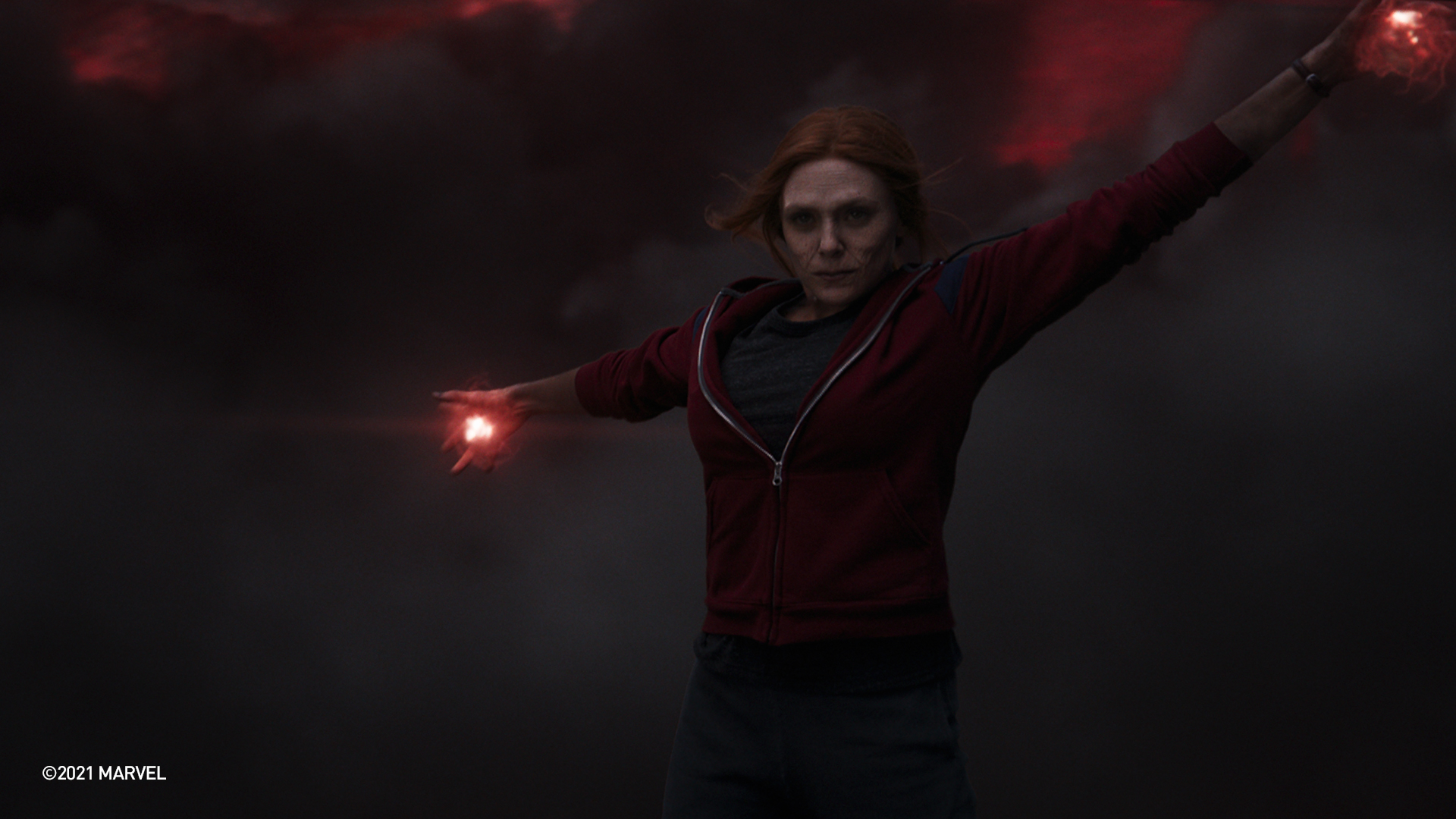