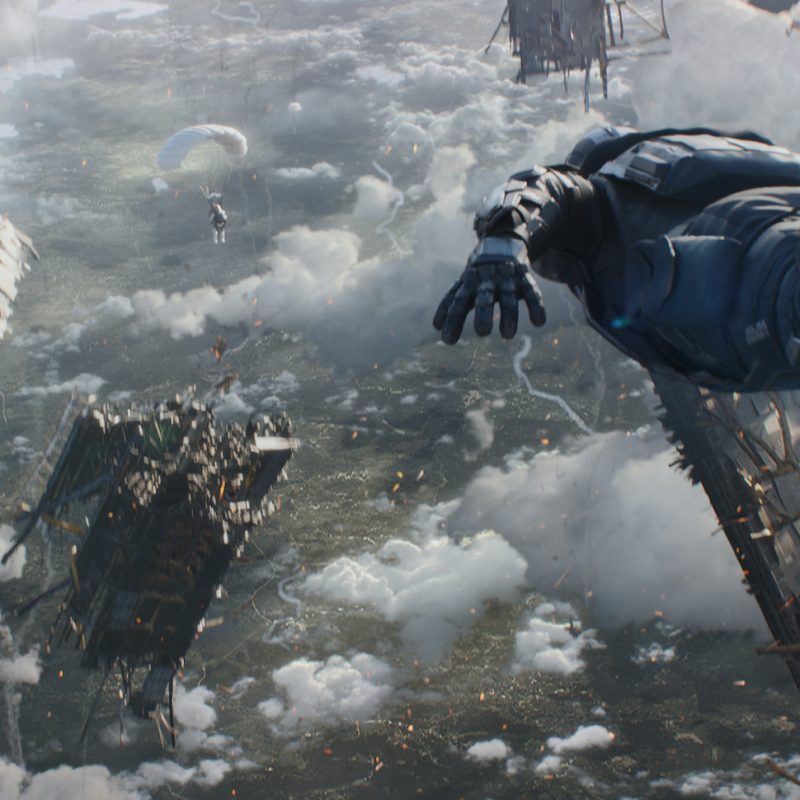 In Marvel Studios’ Black Widow, the title character confronts the demons of her past in a spectacular – and explosive – fashion. After discovering a flying fortress hidden in the clouds, the Avenger puts on a master class in destruction, leading to an airborne battle with heroes and villains dodging flaming wreckage as they approach terminal velocity. It’s one of the most visually complex and technically demanding scenes ever seen on film, made possible by Marvel Studios’ longtime collaborator, Digital Domain.

Since her introduction to the Marvel Cinematic Universe (MCU) more than a decade ago, the origins of Scarlett Johansson’s Natasha Romanoff, aka the Black Widow, have only been hinted at through the occasional one-liner and dream-like flashback. In Black Widow, Romanoff’s history is finally revealed, including her time spent in the brutal “Red Room,” a training ground for world-class assassins that she thought was destroyed. After discovering that it is still active – and airborne – the Red Room makes a spectacular and visually stunning debut in Black Widow. 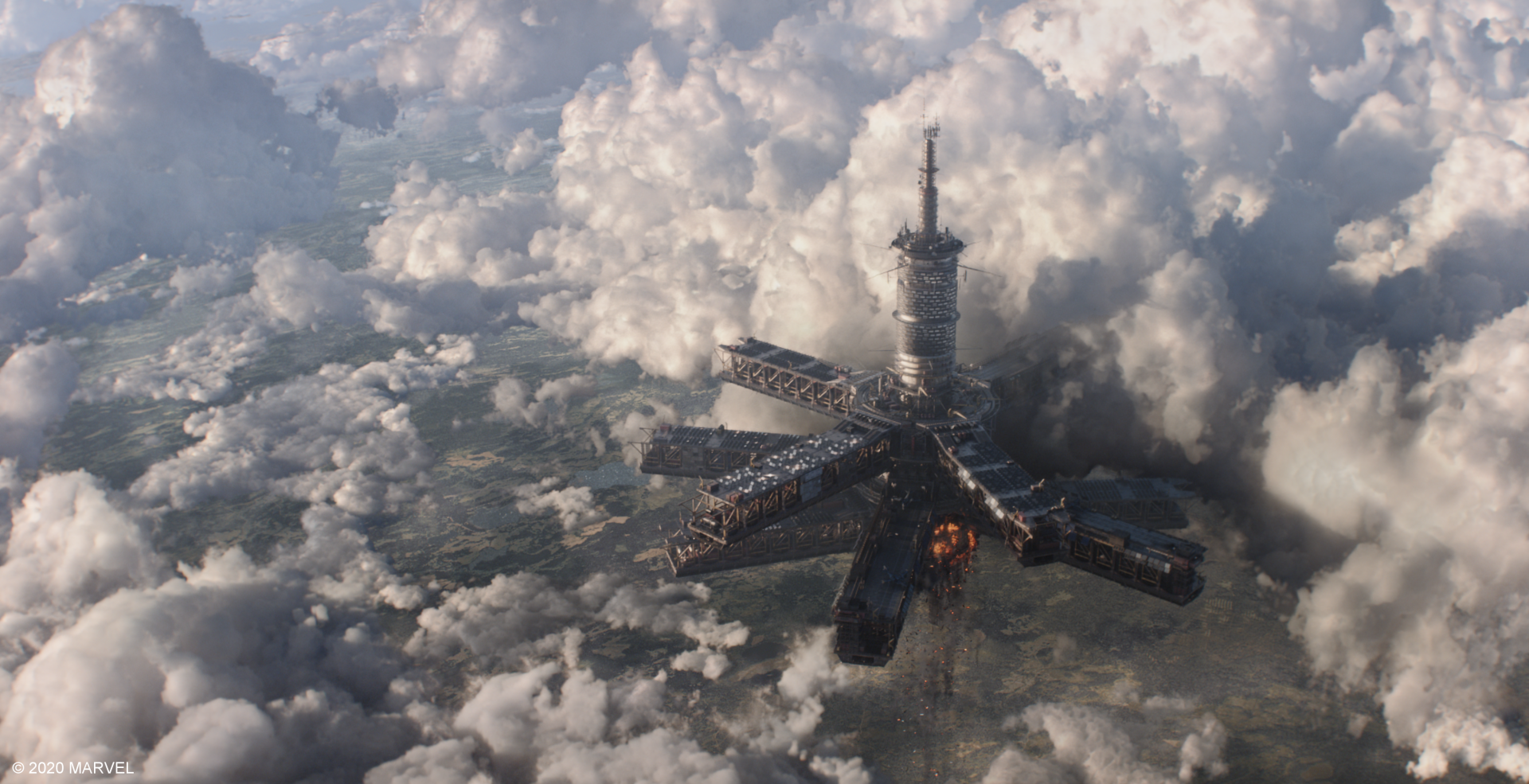 Working with Marvel Studios and their visual development group, Digital Domain created the flying Red Room and the surrounding environments entirely in CG. The structure was designed to appear both intimidating and functional, with Marvel artists choosing a style that echoes Soviet-era architecture. The massive base features airstrips, walkways, a central tower and several engines keeping the structure aloft, all of which needed to be created digitally.

To bring the Red Room and the surrounding environment to life, including individual clouds and the countryside below, Digital Domain’s artists used a suite of post-production tools that integrated both Maya animation and Houdini effects pipelines into every shot. With the stage set, artists then added movement to the flying fortress, giving it a realistic and consistent look that doesn’t feel out of place in a world of superheroes. Digital Domain then went about destroying it.

With hallways shattering around her and gravity turning deadly, the explosive collapse of the Red Room becomes a frantic escape for Black Widow and her allies. As characters flee the doomed structure via jet, parachute and in some cases freefall, they are joined on their descent by both enemy soldiers and debris ranging in size from small scrap to large sections of buildings. Each shot features dozens of pieces of wreckage at any time, all leading to one of the most intense skydive sequences ever seen on film. 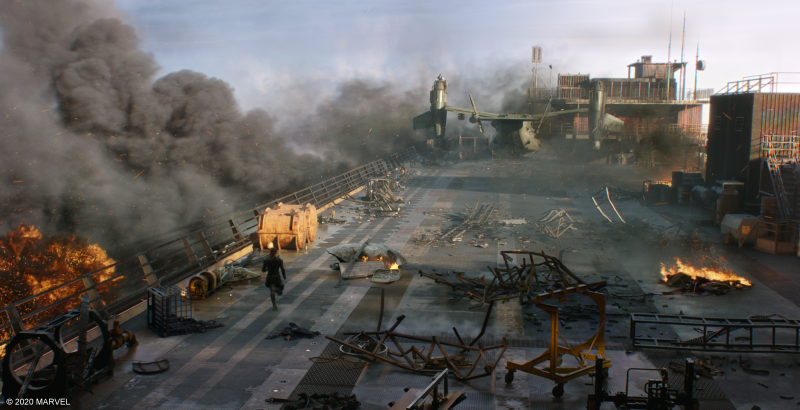 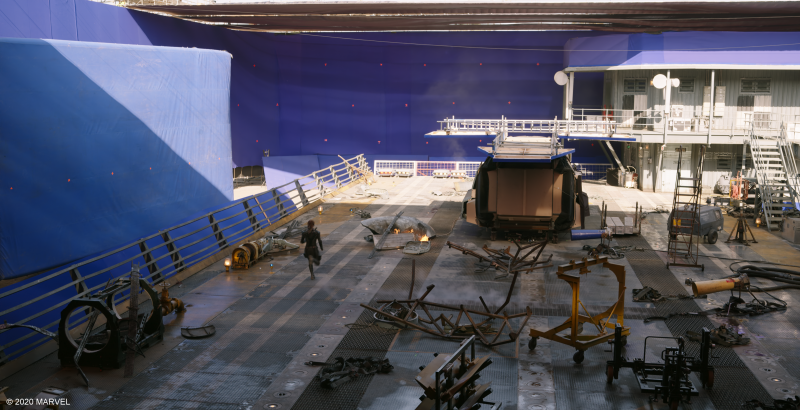 To create the live-action portion of the skydiving scene, the filmmakers used a combination of practical techniques to capture the principals, including shooting talent on wires and mechanical arms against bluescreens, recording performers held aloft in an indoor vertical wind tunnel and filming trained stunt people through multiple skydives. The footage was then sent to Digital Domain, where artists created a layout that tracked where the characters and the major pieces of debris were at any given time.

With the general layout set, the team at Digital Domain determined how the scene would evolve under different lighting and environmental conditions, as well as how the characters’ interactions would affect the falling debris. That included altering the rotation of a jet in freefall as Black Widow flies through, and a memorable scene where the Taskmaster slows their momentum by dragging a sword across a piece of a falling building. Clouds were also added and removed to reflect momentum, the lighting was constantly changed to reflect the setting sun and wreckage shattered as it slammed into itself, giving the entire scene a frenetic feel.

Artists went through shot-by-shot to maintain continuity, digitally altering each key asset and environment by hand. It was a monumental and time-consuming task requiring several iterations. To create the destruction and hard surfaces – while also rendering the scene quickly enough to allow for changes – the team at Digital Domain turned to GPU rendering, along with Maxon’s GPU-accelerated renderer, Redshift. 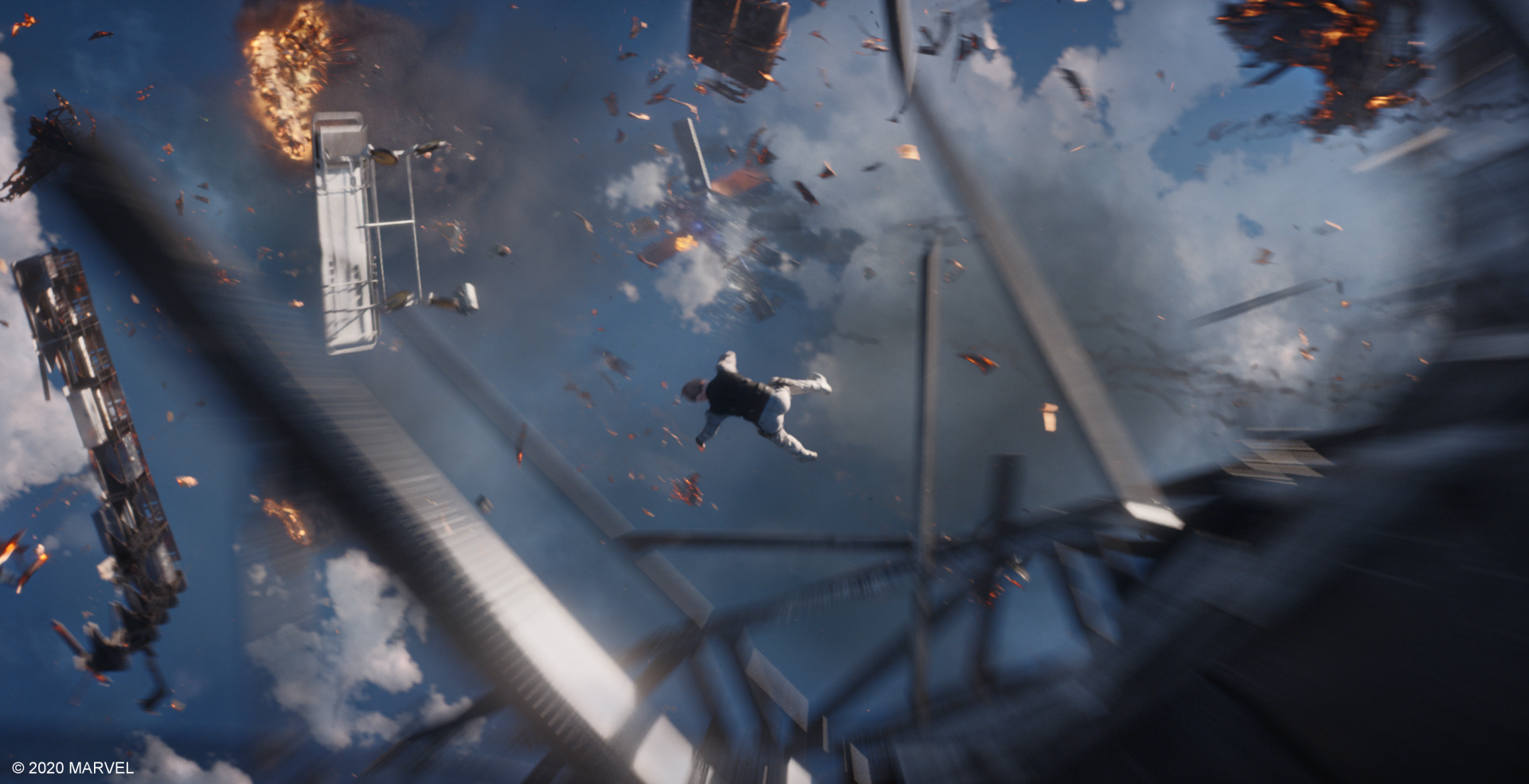 “Rendering one cloud is easy, but rendering 100 clouds – along with dozens of pieces of big and small debris – is very complex, to say the least,” said Dave Hodgins, Digital Domain VFX supervisor. “GPU rendering allowed us to do more in a shorter period of time, and create something that we’re not only proud of, but opens up a new world of possibilities.”

GPU rendering took on the bulk of the wreckage and debris work, while traditional CPU rendering was reserved for digital characters and volumetrics. Although a relatively new technique for achieving photorealistic effects on a large scale – due in part to the hardware demands – Digital Domain successfully tested the technique with Marvel Studios’ Captain Marvel. To create the climactic and explosive shootout inside the hangar of the hidden Skrull ship during the third act of the film, GPU rendering was employed to create several digital explosions, each leading to multiple, smaller explosions that created a sea of debris. The work done on Black Widow builds on that experience, but elevates it to a much higher level. 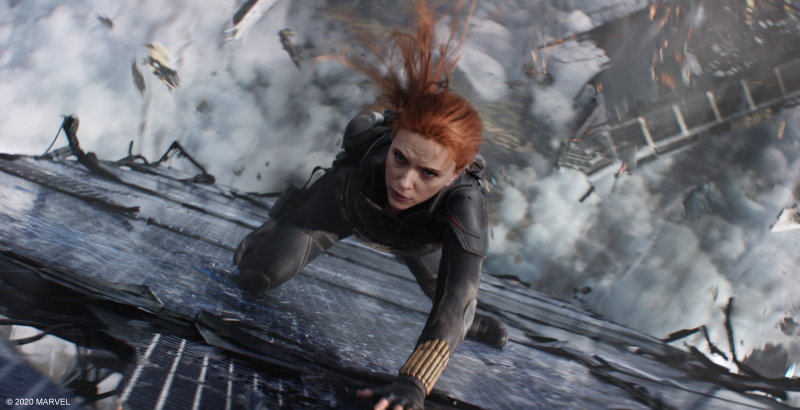 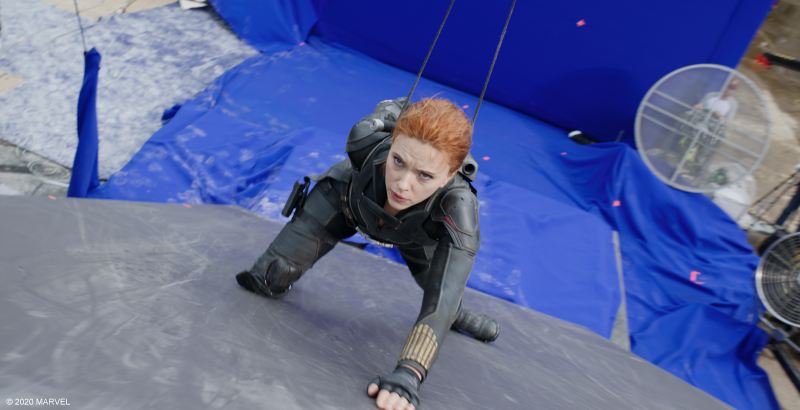 Once the primary characters make it safely to the ground, the action continues as Black Widow faces off against the Taskmaster while a storm of metal rains down around them. The filmmakers used a combination of practical effects – including physical props dropped on the stage – along with bluescreens to introduce some of the larger wreckage. Artists at Digital Domain tracked the falling debris and altered it to reflect the damage caused by the impact, altering each piece as needed.

While the characters face off, Digital Domain also gave the Red Room a final send off, as the remains of the fiery and smoke-covered structure crashed into a nearby forest. The main characters then stand amid a field of real and CG debris as they head off to their various fates.

“Digital Domain has a long and proud history of creating amazing destruction on screen, from iconic ocean liners to entire cities, but the work we did in Black Widow is on another level,” said John Fragomeni, global VFX president at Digital Domain. “Marvel Studios’ latest blockbuster challenged us to look at the debris as if it were a moving, fluid environment in its own right. That allowed us to rethink how we approach CG destruction in films, and it will help us go even further in the future.”

In total, Digital Domain completed around 320 shots for the film, with work spread between its Los Angeles, Vancouver and Montreal offices. The award-winning studio’s work on Black Widow marks more than a decade of collaboration with Marvel Studios, including multiple feature films and television series. Digital Domain recently completed work on Loki, and is currently working on Shang-Chi and the Legend of the Ten Rings, Spider-Man: No Way Home, Doctor Strange in the Multiverse of Madness and more.

Black Widow is in theaters and available to stream on Disney+.