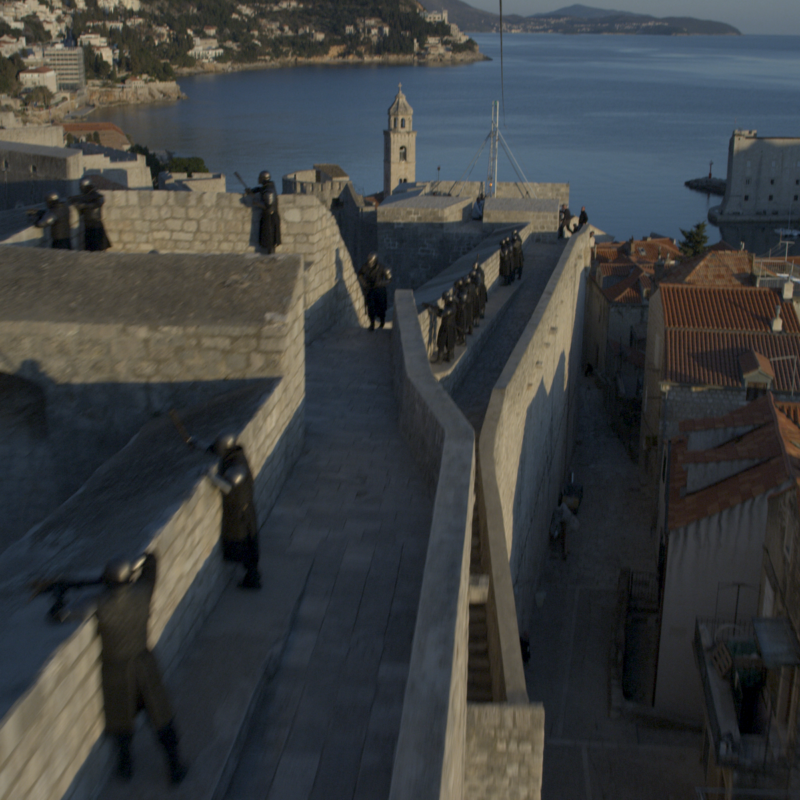 Digital Nottingham Centerpiece of New “Robin Hood”; Brought to Life Over Six Months With Help from Substance Painter and Designer

The city of Nottingham perpetually exists in two states: the metropolitan center that it is today, and the fictional home of one of the world’s most famous outlaws. So when the filmmakers behind 2018’s Robin Hood looked to recreate the fictional Nottingham, it needed to build it from scratch with help from London’s Cinesite Studio.

Working closely with “Robin Hood’s” VFX supervisor Simon Stanley-Clamp and director Otto Bathurst, Cinesite created a handful of settings and backgrounds for the film, starting with a digital model of Nottingham built to scale. Given its modern look and feel, Nottingham of today wouldn’t do, so the team used Dubrovnik, Croatia as its template. The Croatian city – best known to TV fans around the world as the model for Game of Thrones’ Kings Landing – has become a popular spot for filming historical fiction, thanks to its famed stone walls and medieval structures. That made it an ideal starting point for a film set around the time of the Crusades. 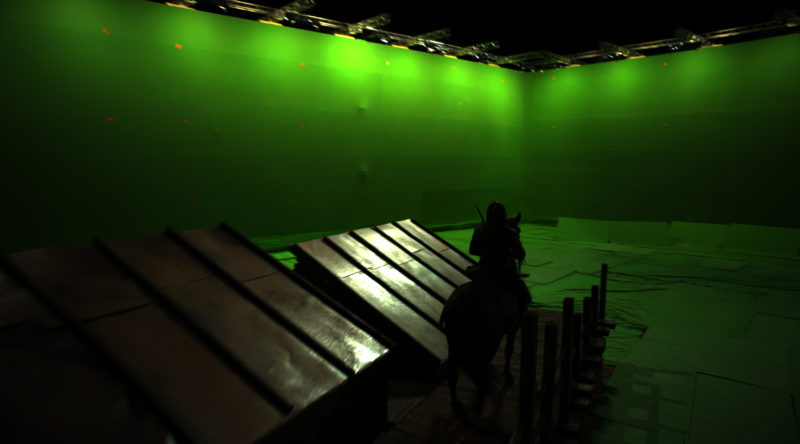 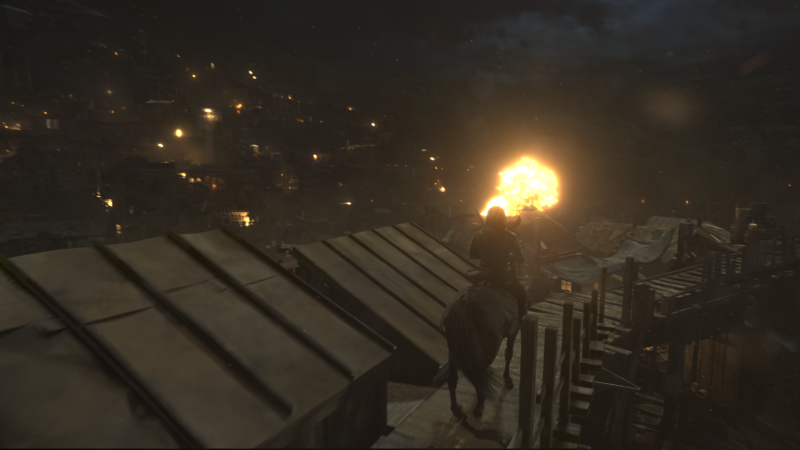 “Robin’s Nottingham is a teeming industrial city dominated by global influences, politics and religion. It’s also full of posh grandeur, but populated by soot-choked mines and sprawling slums reflecting the gap between haves and have-nots, and we needed to establish that at a glance for audiences,” said Cinesite’s head of assets, Tim Potter. “With so many buildings making up the city, the Substance Suite allowed us to achieve the many variations and looks that were required for the large city of Nottingham in a very quick and easy manner.”

Using Maya for the builds and ZBrush for sculpting and displacement, the VFX team then relied on Substance Designer to customize the city, creating detailed materials that would give life and personality to the stone and wood structures. From the slums inspired by Brazilian favelas to the gentry and nobility’s grandiose environments, the texturing and materials helped to provide audiences with unspoken clues about the outlaw archer’s world.

Creating these swings from the oppressors to the oppressed was often a matter of dirt, dust and grime, which were added to the RGB channels over the textures to add wear and tear to the city. Once the models and layouts were finalized, Cinesite then added even more intricate details using Substance Painter, giving an already realistic recreation additional touches to reflect the sometimes messy lives of the people that would inhabit a city like Nottingham. 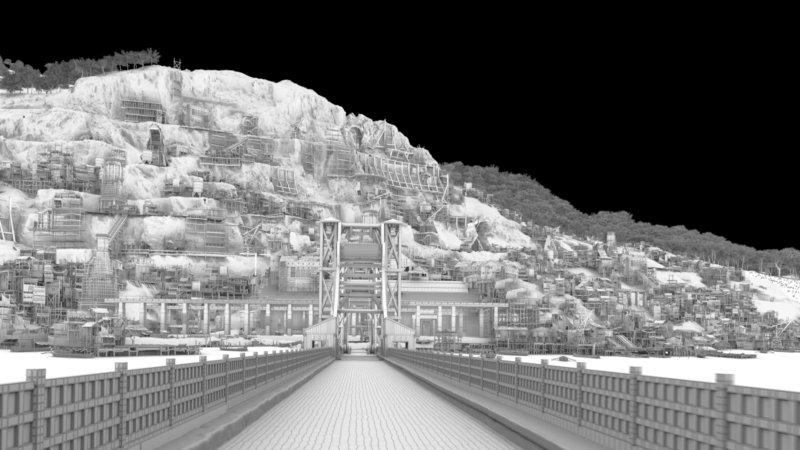 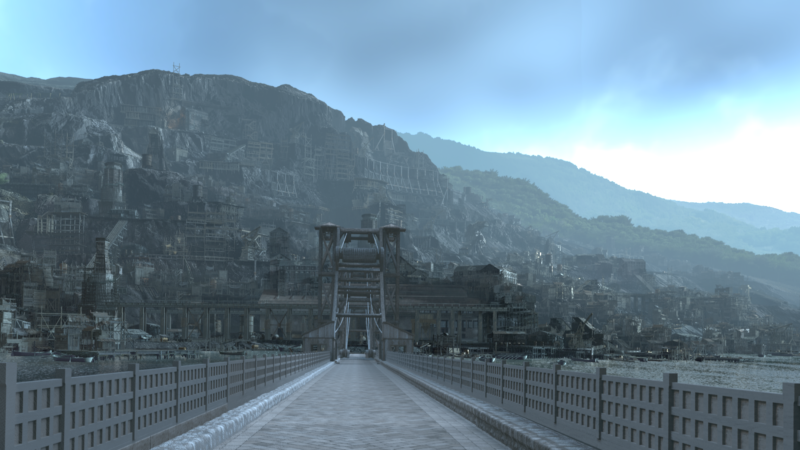 At its peak, Cinesite had around 145 artists working on the project, including around 10 artists focusing on texturing and lookdev. The team spent six months alone on creating the reimagined Nottingham, with another three months spent on additional scenes. Although the city of Dubrovnik informed many of the design choices, one of the pieces that had to be created from scratch was a massive cathedral, a focal point of the story. To fit with the film’s themes, Cinesite took inspiration from several real churches from around the world to create something original, with a brutalist feel.

The team also created Robin’s childhood home of Loxley Manor, which was loosely based on a real structure in Završje, Croatia. Two versions of the manor were created, including a version meant to convey the Loxley family in better times, and another seen after years of neglect and damage, created using models and digital texturing. Cinesite also helped to create one of the film’s most integral and complex moments, which saw Robin engage in action-packed wagon chase through Nottingham. The scene was far too dangerous to use real animals in most shots, requiring Cinesite to dip back into its toolbox to create the texturing and look of the horse and its groom, along with the rigging and CFX.

Cinesite’s use of Substance has steadily increased since 2016, when it first started to experiment with the tools to create digital props. As Painter and Designer have continued to evolve and introduce tools built specifically for the VFX community – from subsurface scattering to 8K support and more – Cinesite began to further integrate Substance into its pipeline. Using various layers, the Substance Suite gives Cinesite the ability to make changes to models or UVs without having to constantly refine textures, while keeping the maps live and unbaked. Substance also allowed the team to create highly detailed textures and variations quickly and easily on films like Robin Hood, the Liam Neeson movie The Commuter and more.

“To create the world that the filmmakers wanted, we started by going through the process of understanding the story. From there we saw what the production had filmed and where the action needed to take place within the city, then we went about creating something unique,” said Potter. “The scale was massive, but the end result is a realistic world that will feel somewhat familiar, and yet still offer plenty of surprises.”

Allegorithmic, an Adobe company, is the industry leader in 3D texture and material creation technologies. More than 150,000 users in the domains of games and entertainment, film and VFX, architecture, and design rely on Allegorithmic’s award-winning Substance texture and material authoring software for developing the next generation of digital content. Clients include: Naughty Dog, Activision, Sony Computer Entertainment, Electronic Arts, Ubisoft, Double Negative, MPC, Foster + Partners, Gensler, Louis Vuitton, Mercedes-Benz and IKEA. Founded in 2003, Allegorithmic is based in France with offices in Clermont-Ferrand, Lyon and Paris, and has global offices in Los Angeles, Cleveland, Montreal, Singapore and Seoul.

Established in 1991, Cinesite is one of the world’s most highly respected independent digital entertainment studios, producing award-winning animation and visual effects for film, broadcast and streaming media platforms. Alongside global VFX services, its feature animation division works with IP creators and filmmakers to create high-end animated features, based out of Cinesite’s Montreal and Vancouver facilities. Cinesite continues to forge new partnerships and collaborations with leading studios and filmmakers to deliver stories that resonate with a global audience.

The company is headquartered in London with studios in Montreal and Vancouver alongside group VFX brands Image Engine and TRIXTER, collectively the group has capacity for over 1,550 artists and filmmakers. For more information, visit Cinesite.com.