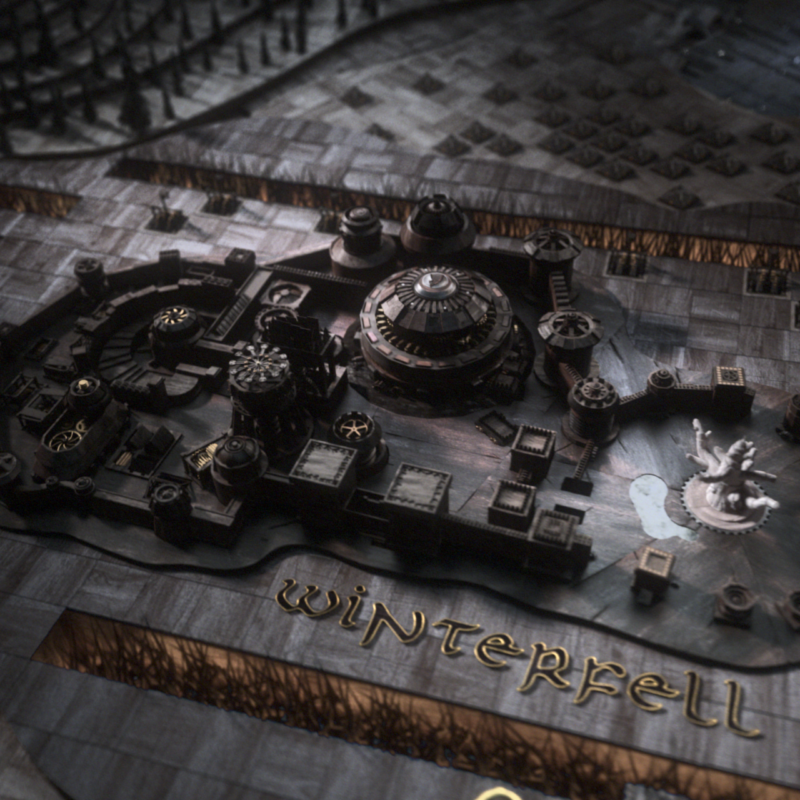 Every Game of Thrones fan knows, you don’t skip the credits. They are your first clue into where the story is going. But after seven seasons, the story had brought everyone to Westeros, creating a new challenge for artists used to making sense of the sprawl. With less distance, the show would be even more centered on relationships, giving Elastic a chance to re-shape their iconic credits around the worlds within.

To Elastic, this meant journeying inside some of Westeros’ most famous landmarks, fulfilling a brief that put everything on the table, as long as the visual language and clockwork shots remained intact. 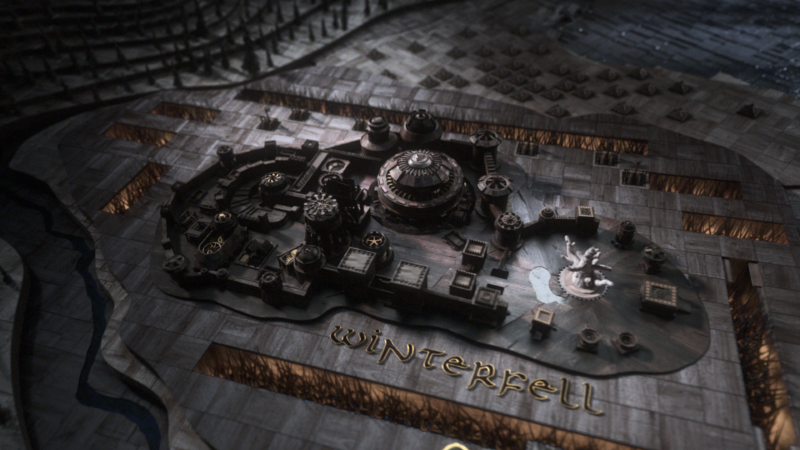 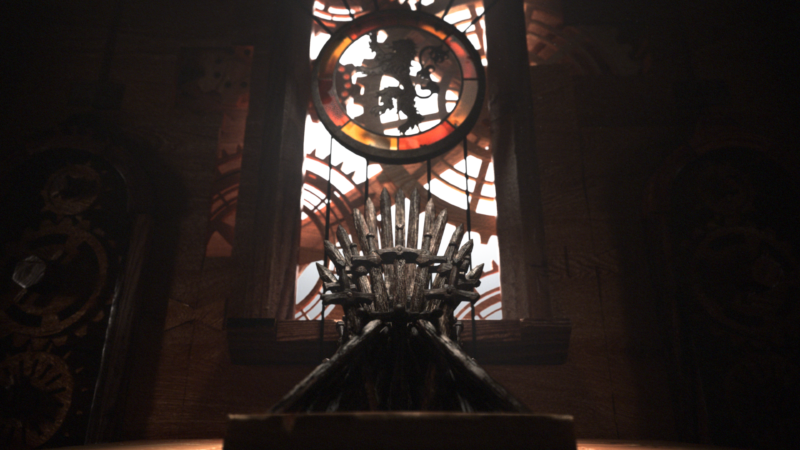 “When we heard that, our brains went into overdrive,” said Kirk Shintani, Art Director and Head of 3D at Elastic. “There have been so many things we wanted to update and change since season one, but we never had the time. Once we knew we were going inside the buildings, we suddenly had no choice. We had to start from scratch and all of our old ideas came tumbling out.”

Going into the locations posed a new set of questions for the artists, who needed the audience to immediately understand where they were. Beginning and end points, unique characteristics and the way rooms flowed together were all up for discussion. Elastic’s old rules around depth of field and camera movement also had to be thrown out. What had worked on the exteriors no longer applied, leaving the team questioning how to include the right details at the right scale.

“We wanted to avoid hiding the transitions in any way and keep the moves seamless, so when you transition from a super wide into a tight interior, it would feel as claustrophobic as possible,” said Shintani. “Asset sizing played a huge role in this. If we were to make the entire Red Keep a foot tall, then the Iron Throne would be the size of a pea. So we worked backwards from our smallest interior element and set exterior scale from that.” 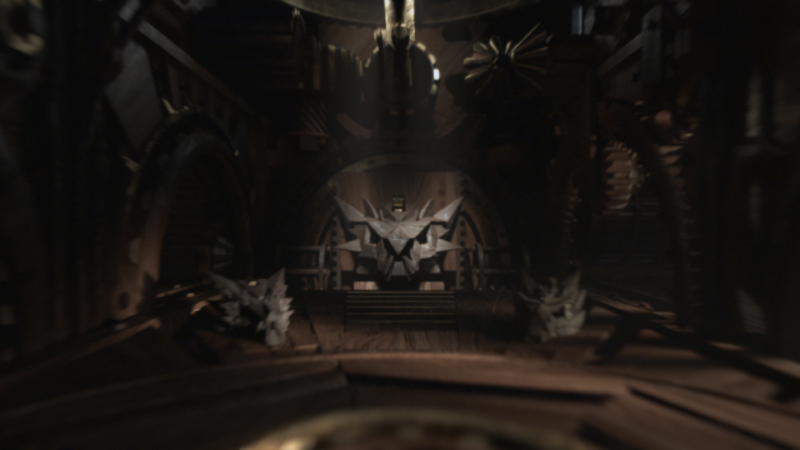 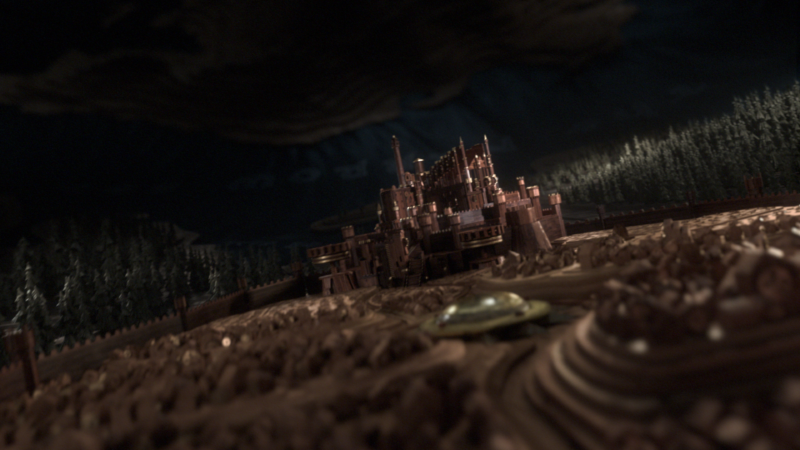 Behind the scenes Elastic used V-Ray for Maya to render the animations, which continued to adapt over the course of the season to reflect changes in the narrative. The new structures also gave Elastic license to do something they’d wanted to do for a long time: add more details. All of which were refined with the help of V-Ray Next’s IPR system.

“Creative is king at Elastic, so we always want to keep pushing and tweaking until we get the best result possible,” said Shintani. “Interactive rendering with V-Ray IPR is really fast, so we were able to dial things in quickly and just keep tweaking. We probably did about 3-4x more work in season eight than we did in season one, but we were able to do it in the same amount of time, with a ton more detail. V-Ray was essential in making this happen.”

With the White Walkers on the move, showrunners D.B. Weiss and David Benioff wanted to amp up the tension with a weekly reminder of their progress. To accomplish this, Elastic developed a concept from season one where land pieces changed as power shifted throughout the kingdom, similar to a Risk board. Adapted to the White Walkers, the path became a series of icy blue tiles that would flip each week on their way to Winterfell.

But since the Westeros map is spherical, the implementation of the tiles proved more challenging than Elastic originally thought. The new world now included dozens of layers of wood, making the process of laying out each tile much more involved. Looking for a tactile quality, the team used V-Ray for look development before deciding on glass with a white wood base. Once selected, V-Ray Proxies were applied to optimize the rendering, bringing more speed to the elaborate five-month project. 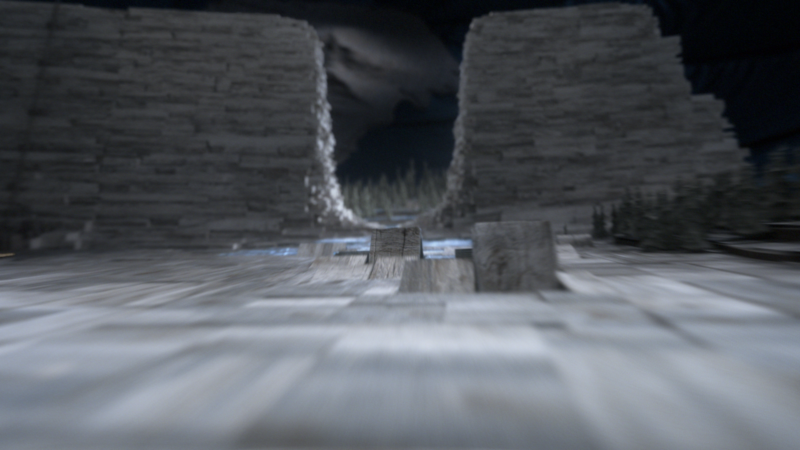 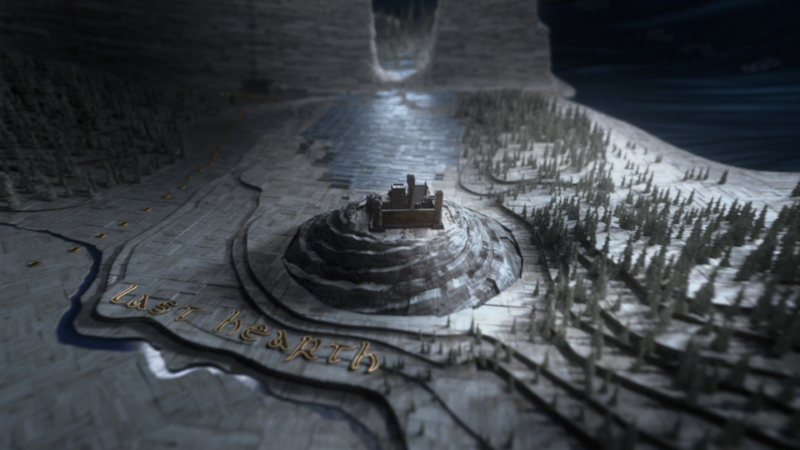 Unlike past iterations, Elastic had to account for both the structure and the area around Winterfell, which needed to be played up to show Walkers in the distance. The famous Godswood Tree would also be redesigned with more scale and density. In a nod to past seasons, Elastic had the camera sweep around the tree, providing a moment of familiarity before they shattered expectations and took fans inside.

Lighting The Great Hall and Crypt proved difficult at first, as the team’s old tricks didn’t work on interiors. The mission quickly became keeping the light alive, as the team learned how light interactions between the window cutouts, gaps and gears would help it move throughout the shots. Using V-Ray light fog, the artists made the environmental elements work to their advantage, ensuring that the shafts of light would naturally react to the motion of the gears and wood, even in dark spots like the Crypt. 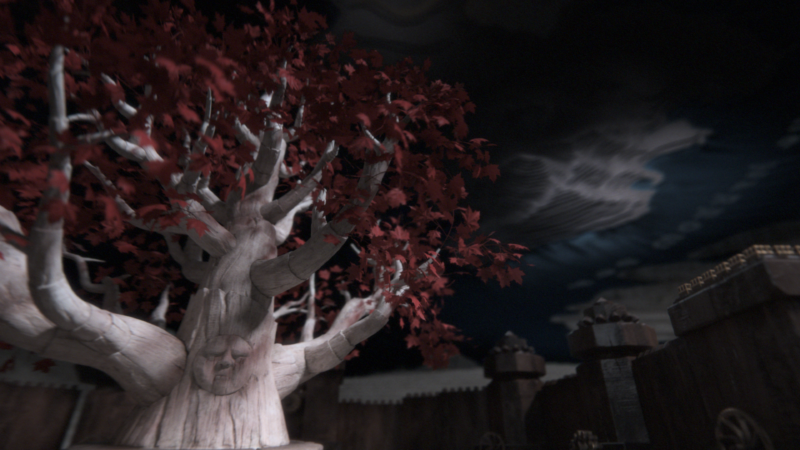 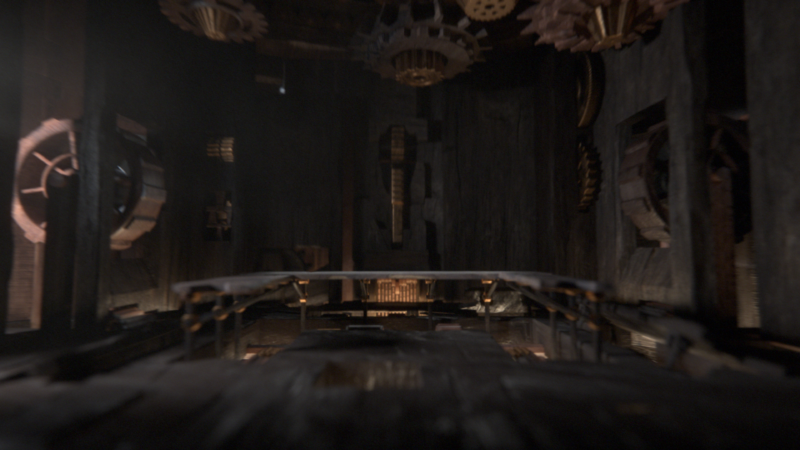 Besides being the largest asset in Westeros, King’s Landing would also undergo the most change in season eight, requiring a full redesign from the ground up. With new elements like The West Gate and Throne Room coming in, the previous design needed more detail and scope to support a flight from the outside in.

Instead of building both exterior and interior models, Elastic put everything into one asset – so as the camera flies down into the spiral staircase, there would be a perfect, unbroken transition from the exterior to the Skull Room. The team worked with the showrunners to include specific details, like a crossbow pointed at a dragon skull and the spiral staircase itself, only to find out later that these were actually Easter eggs that foreshadowed future events.

“Dan, David and Greg [Spence] gave us just enough to get it right, so just like the fans, we could have our own aha! moments down the road,” said Shintani.

When it came to the finale, Elastic got a bit more. Knowing that King’s Landing would be leveled in episode five, showrunners asked Elastic to reflect the devastation in the credits, giving them just enough concept art to get the gears turning.

“We were all a little bit hesitant to look at it, since we didn’t want to spoil it for ourselves! Once we started, Dan and David kept telling us to destroy more, so we just kept breaking everything,” said Shintani. “We really wanted the idea of the mechanical underpinnings to come through, so if you look back at any of the destruction, you’ll notice that the parts are still moving and clicking in place, as if something inside has broken. This way the locations don’t feel static or like a pile of parts. They are still part of a larger structure within.” 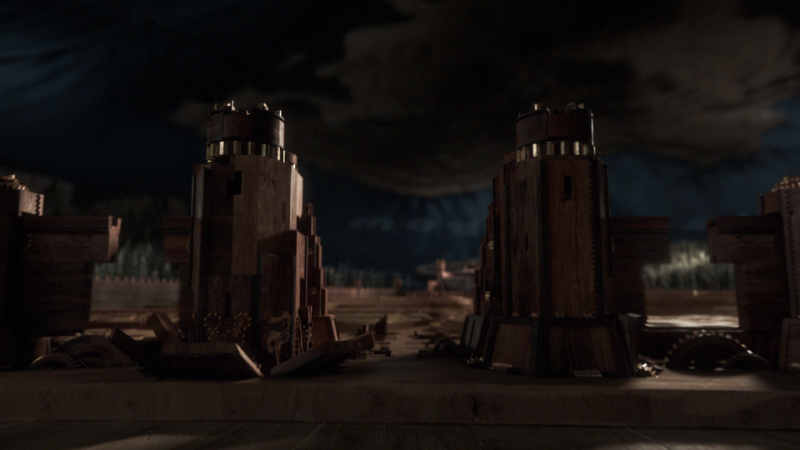 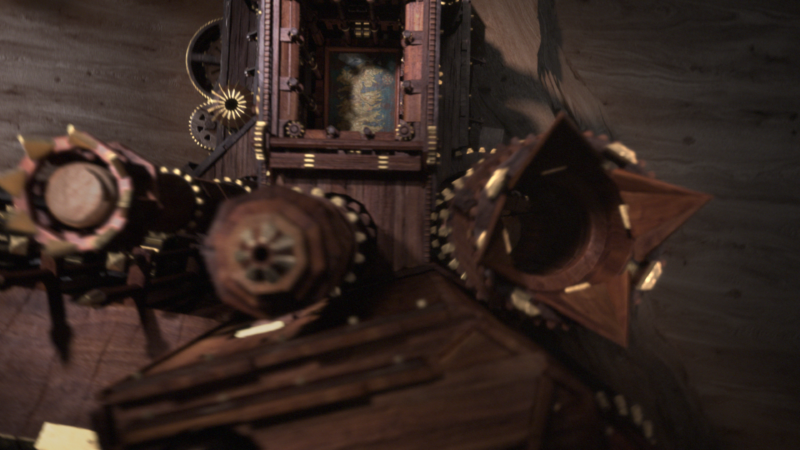 V-Ray’s speed came through for them again, handling all of the geometry and textures so they could continue to test ideas before showing them to the wider Game of Thrones team.

“We’d create something and Dan and David would say keep going,” said Shintani. “IPR and the ability to iterate quickly allowed our team to keep refining on schedule until we got it just right. By the end of production we were up to 2 million frames, with some scenes coming in at almost 100 million polygons. And V-Ray continued to come through for us, just like it always has. When we first fired it up for season one, it was part of what gave the credits their unique look. And now here we are, almost ten years later, still creating CG together. It’s been a wild ride.”

To learn more, tune into a special CG Garage episode with Kirk Shintani on the history of the Game of Thrones credits, from season one to season eight. 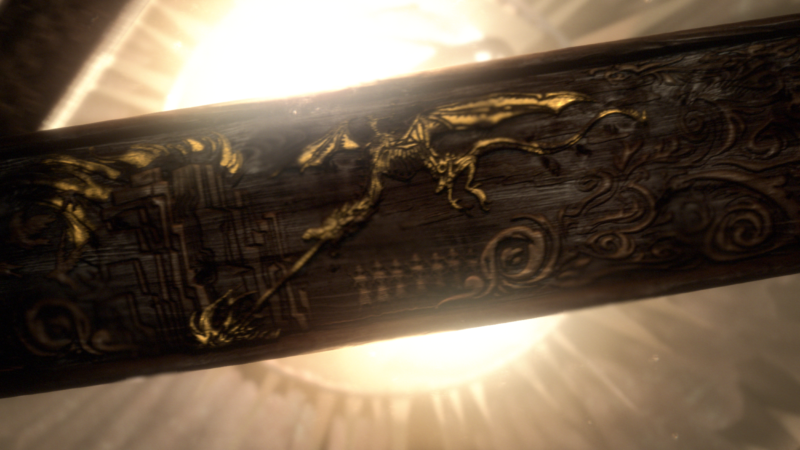 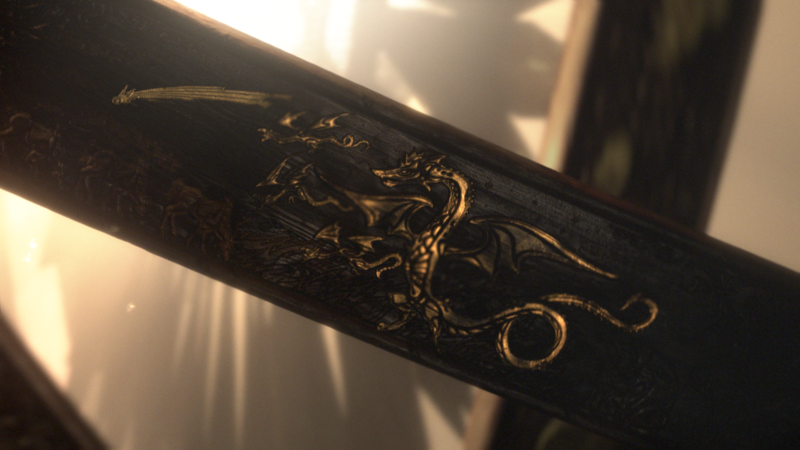 Elastic is a group of filmmakers whose collective voice utilizes a cross-section of visual mediums. Launched in 2008 by the founders of Rock Paper Scissors and VFX studio a52, Elastic produces some of the most captivating and innovative work in entertainment and advertising.