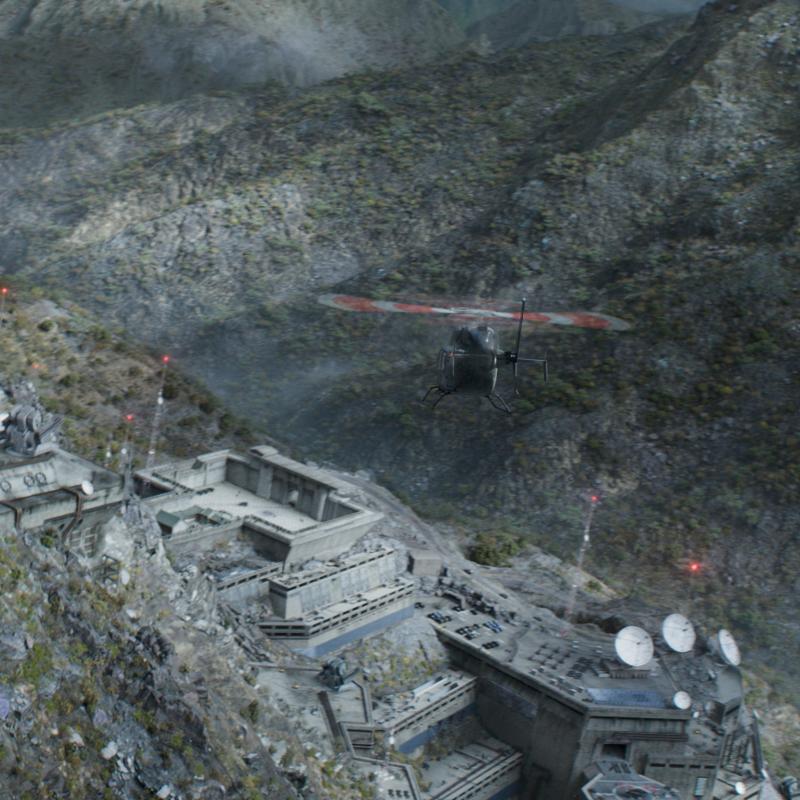 How Digital Domain Created the Ten Rings’ Fortress in ‘Shang-Chi’

In Marvel Studios’ latest feature film, Shang-Chi and the Legend of the Ten Rings, the film’s antagonist Wenwu (Tony Leung) is unlike most of the villains seen in the Marvel Cinematic Universe (MCU). The ancient character operates out of a remote fortress that has existed for centuries, and over the years, has grown and changed, reflecting his loves and losses. It’s an ever changing and fluid structure, created and edited by Marvel Studios longtime collaborator, Oscar-winning VFX studio Digital Domain.

“When we first heard Marvel Studios’ plan to create a film like Shang-Chi with a new type of hero, we knew it would be something special and we were excited to be part of it,” said Hanzhi Tang, Digital Domain VFX supervisor. “It’s been incredibly gratifying to hear the critical and fan reaction, and we’re proud to have played a part.”

A Fortress Unlike Any Other

Digital Domain was approached early in the production of Shang-Chi and asked to help introduce audiences to one of the film’s most important locations: Wenwu’s compound. The sequence follows a helicopter over a remote and uninhabited wilderness, inaccessible to all but the most determined. But rather than mounting a difficult and budget-busting expedition to film on location, the filmmakers asked Digital Domain to create the entire opening scene digitally, from the ground to the sky, along with the fortress itself.

Working with the Marvel Studios art department, Digital Domain began building the landscape using survey data of an uninhabited area of New Zealand. Working with the filmmakers, artists created several iterations of the CG landscape using Maya and Houdini. Artists experimented with the precise look of the rock and vegetation, eventually creating a complete forest. They then added environmental effects like mist and cloudy skies, utilizing Redshift and GPU rendering to handle the massive number of details and allow for faster iterations. Digital Domain then added a helicopter that became the focal point of the scene, along with the impression of movement across the landscape.

To create the compound itself, Digital Domain used a combination of CG and live footage on physical sets. After an introductory look from the air created entirely using CG, the location includes a series of shots on plates and live action. Artists initially received LiDAR scans of the courtyard, which included blue screens above the set. With the live action focused on the courtyard, artists then added the rest of the compound, creating a look that reflected the location’s expansion over the course of centuries. With the scene set in 1996, artists also added technology and equipment appropriate to that era.

Following a jump to the modern day, the film returns to Wenwu’s compound to find it significantly altered, reflecting the character’s heartbreak and anger. Using the original model, Digital Domain’s artists updated the look, giving it a militaristic and ominous feel. The compound has become more fortress than home, with new defenses and weaponry added digitally, and dated components reflecting the 90s removed. The film then returns to the compound once more for the final shot, with artists updating the location once more to reflect the shift in circumstances and modernizing it for a new era, complete with modern artwork, telecommunications towers and the removal of many of the more aggressive features previously added.

Digital Domain also helped create Shang-Chi (Simu Liu) and his allies’ escape from it. After being forced back to his former home, Shang-Chi leads a group to a massive staging area, filled with dozens of vehicles. After selecting a BMW X3 to escape in, the fun begins.

The escape from the compound sequence is a mixture of practical and digital effects, beginning with the BMW itself. To capture the performances of the characters in the BMW, the roof of the SUV was removed, then later replaced by Digital Domain’s artists. The BMW itself was also recreated digitally — along with a pair of motorcycles and an armored personnel carrier (APC) — using LiDAR scans sent to the artists from the set, and CAD files from the manufacturers. Digital Domain also added additional touches to the structure, including windows with server rooms in the distance and a power source in the distance.

During the violent chase, the stunt performers driving a pair of motorcycles were replaced by digital human replacements and CG models of the vehicles. The filmmakers were then able to show the riders meeting a grizzly fate that would otherwise be too dangerous to perform using practical effects. The chase then concludes with the BMW narrowly escaping, while the APC crashes into a concrete gate. For this, the filmmakers used a real vehicle and recorded it during a high-speed crash, with Digital Domain adding digital flourishes.

In total, Digital Domain created nearly 250 shots for the film. Along with the exterior and escape from the fortress, the VFX studio also helped replace the ten rings in several scenes to give them a more free-flowing look, added several costume replacements throughout the film and also replaced Razor Fist actor Florian Munteanu’ hand with a metallic brace for his non-combat scenes.

“Working with Marvel Studios has allowed us to flex our creative muscles in ways we never thought possible, and each new project lets us try something new for both the big and small screens,” said John Fragomeni, global VFX president at Digital Domain. “As they continue to push the boundaries of visual storytelling, it’s helped us try new techniques and develop new technologies that have benefited everything from our episodics to our commercials to our digital humans and more.”

Shang-Chi and the Legend of the Ten Rings is the latest collaboration in a partnership between Marvel Studios and Digital Domain that goes back more than a decade. The studio’s next MCU work will be seen in Spider-Man: No Way Home and Doctor Strange in the Multiverse of Madness.

Shang-Chi and the Legend of the Ten Rings is playing exclusively in theaters now.

Digital Domain creates genre-defining experiences that entertain, inform and inspire. Throughout the last quarter of a century, the studio has established itself as a leader in the film visual effects industry, expanding to encompass episodics, previsualization, commercials, game cinematics and experiential while also advancing technology in virtual production. Digital Domain has also become a pioneer in digital humans and virtual reality, adding to a rich legacy that consists of hundreds of blockbuster feature films for every major studio, thousands of commercials, music videos, game cinematics and digital content by world-renowned directors and brands.