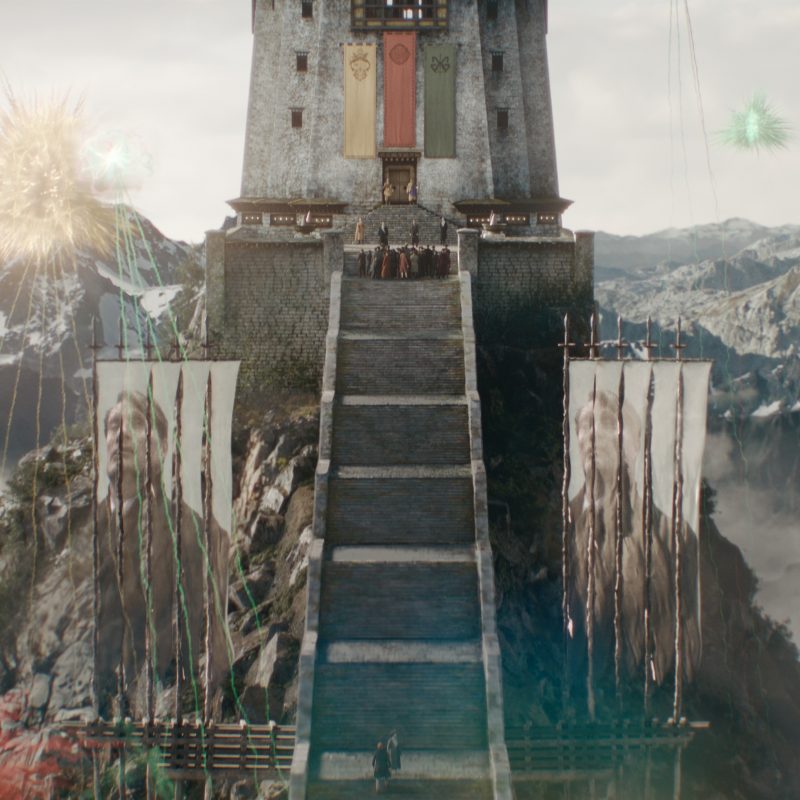 Digital Domain Conjures Digital Crowds and a New Home for Magic in ‘Fantastic Beasts: The Secrets of Dumbledore’

In Warner Bros. Pictures’ Fantastic Beasts: The Secrets of Dumbledore, the latest feature film installment in the Wizarding WorldTM created by J.K. Rowling, professor Albus Dumbledore knows the powerful Dark wizard Gellert Grindelwald is moving to seize control of the wizarding world. Unable to stop him alone, he entrusts Magizoologist Newt Scamander to lead an intrepid team of wizards, witches and one brave Muggle baker on a dangerous mission, where they encounter old and new beasts and clash with Grindelwald’s growing legion of followers. But with the stakes so high, how long can Dumbledore remain on the sidelines? To bring this epic tale to life, the filmmakers brought in award-winning VFX studio, Digital Domain.

“Adding to the legacy of this franchise is a privilege as an artist, partly because the filmmakers are frequently introducing things that have never been seen before,” said Jay Barton, Digital Domain visual effects supervisor. “The pandemic presented some unique challenges, but the filmmakers responded brilliantly, and it pushed us to do things in an entirely new way that led to several custom creations and original techniques.”

In The Secrets of Dumbledore, thousands of magic users have gathered to support the candidates running for the highest office in the wizarding world. But while the wizarding world was free to gather without consequence, production of the film began right at the start of the initial COVID lockdown. That meant that creating massive crowd scenes would require more movie magic and fewer actual people. To answer this challenge, Digital Domain used its expertise in digital humans to create CG crowds numbering in the thousands.

To adhere to social distancing guidelines that limited the number of extras, the filmmakers selected 30 performers to be photographed and scanned, while another 50 appeared in the scene wearing period-specific clothing that helped identify which candidate they supported. Some wore South American clothing signifying their attachment to Brazilian witch Vicência Santos; several were featured in traditional 1930s Asian garb to represent their connection to Chinese wizard Liu Tao; still others wore clothing and styles that showed their support of Grindelwald.

Building on photos and scans of the clothing, and using the 30 scanned performers as digital models, Digital Domain began creating hundreds of articles of clothing in Maya. Each garment was meant to fit and flow naturally, allowing for headgear to fit any upper torso clothing, coats or ponchos to fit with any pair of pants, lower leg garments to work with any shoes, etc. Dynamic hair options were also added, with all hair and cloth sim done using Houdini.

With a library of clothes at the ready, Digital Domain created its own mix-and-match tool to create digihumans on a large scale, each with their own original look. Using this custom method and Houdini’s crowd sim tools, Digital Domain was able to create a crowd of around 5,000 unique and photorealistic digihumans. The VFX studio also spent two days at Digital Domain’s LA motion capture stage recording four performers going through a series of movements to give the crowd a sense of realistic movement and purpose. Using these combined tools, Digital Domain was able to turn three visually distinct CG groups into three animated, confrontational factions, giving the filmmakers storytelling options through VFX that simply wouldn’t have been possible otherwise.

The Secrets of Dumbledore takes audiences to several remarkable and significant places that fans of the physical wizarding world will appreciate, but few are as central to the plot as the German Ministry of Magic, a five-story, arrowhead-shaped building hidden in the heart of Berlin. Located behind a magical wall, the Ministry building rests in the center of a massive courtyard. To create the magical grounds – and then populate them with crowds of political supporters – Digital Domain began with a door.

In keeping with the traditions introduced in the original series, the German Ministry of Magic is hidden in a way that makes it accessible to magic users alone. To create the entrance to the Ministry, the performers on a soundstage made their way through a series of cones and markers with a bluescreen in front of them. Building off that, Digital Domain took the live footage and created a matchmove version of the scene, building a CG volume of each character. Artists worked in Houdini to create a brick wall, then used intersection sims to break it apart when the characters touched it. The characters then push through the magical barrier, with CG built bricks slowly splitting apart on their own, to find the German Ministry of Magic.

Working from concept art and a small, physical, one-story set, Digital Domain created the German Ministry of Magic from scratch. The five-story structure was modeled in Maya with textures added using Mari and Photoshop. Additional lighting and rendering were then handled by V-Ray. Along with the exterior structure, the VFX team also handled all of the shots of the exterior of the Ministry, as seen from inside the building through CG composited windows.

The action at the Ministry culminates with the ominous appearance of Grindelwald, who arrives on the Ministry grounds in a period-appropriate luxury vehicle, complete with a magical hood ornament that morphs into a small dragon forming the letter “G.” To create this vital moment, Digital Domain created a digital version of the car to show its approach, complete with animated dragon, based photogrammetry and LiDAR scans of the car provided by the filmmakers. As the vehicle pulls up, the crowd mobs it, leading to a clash between supporters with hundreds more adding to the background. The filmmakers utilized a combination of real and CG, with the center of the shot – including the car and the performers – live-action, and the surrounding crowds all CG creations.

Deciding the Fate of the Wizarding World

Leaving Germany behind, the heroes and villains find themselves on a mountain in Bhutan, where the election will determine the new head of the wizarding world. The location features two primary areas, a large courtyard where thousands of wizards and witches converge to vote, and the Eyrie at the top of the mountain where a handful of dignitaries watch the proceedings. The sequence combines two physical sets – one large outdoor location, and another inside a soundstage. The rest, including the mountain, sky and surrounding environment, is the result of digital artists.

Working from real-world aerial photography, Digital Domain began the creation of the mountain and the Eyrie using digital models, photogrammetry and elevation models. Multiple lighting models were then added to give the filmmakers the ability to show the progress of time from day to night. To populate the crowded courtyard, Digital Domain employed its crowd simulation tools and filled the locale with roughly 4,000 digital humans, along with plenty of finishing touches – including massive banners that acted as magical jumbotrons, and also CG fireworks.

The story then leads the opposing forces to the Eyrie for a climactic confrontation, but the action occurs within a magical construct separate from reality. Digital Domain and the filmmakers tried a few different options for what this world might look like, including a bright, white area covered in fog, and an obsidian environment where everything was black and reflective. Ultimately, neither palette quite fit the story, leading Digital Domain to create a crystalline version of the real world that offered some of the best of both previous options. Using Redshift for the lighting and rendering, artists created a world that was intrinsically bright, but received less exterior lighting, giving it a moody feel. The glass-like setting also offered a reflective sheen to amplify the color, including the color-coded spells, all created using Mantra, with the geometry of the world handled in Houdini.

For the final sequence alone, including the introduction of the Eyrie and the battle in the magical construct, Digital Domain contributed over 200 VFX shots. In total, the VFX studio submitted more than 370 to The Secrets of Dumbledore, with well over 250 artists coordinating across multiple offices around the world.

Fantastic Beasts: The Secrets of Dumbledore is exclusively in theaters now.