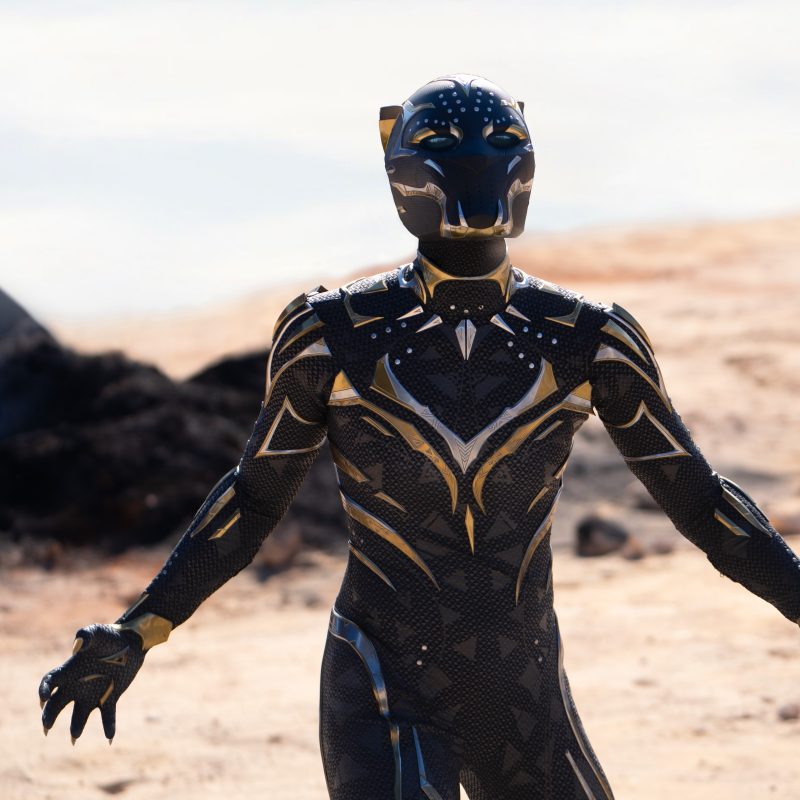 VFX Work Included an Army of Talokanil, the Introduction of Ironheart, the Midnight Angel Armor and the New Black Panther in Action

In Marvel Studios’ latest feature, Black Panther: Wakanda Forever, two worlds collide with brutal results. The technologically advanced Wakandans and the fierce warriors of Talokan fight it out on the high seas, while a decisive battle between the new Black Panther and the Talokanil leader, Namor, takes place in the desert. With effects provided by Oscar-winning VFX studio Digital Domain, the pivotal confrontation is the climactic note to one of the most emotionally charged films in the Marvel Cinematic Universe (MCU), and offers a visually spectacular finale unlike any other.

“From the moment Marvel Studios approached us about Wakanda Forever, we knew it was going to be a special project, built on emotion as much as visuals,” said Hanzhi Tang, Digital Domain VFX supervisor on the film. “But it was also an ambitious film that introduced several major characters to the MCU, along with an army of amphibious superpowered warriors. That let us get creative and use everything from our most sophisticated tools to hand-crafted techniques.” 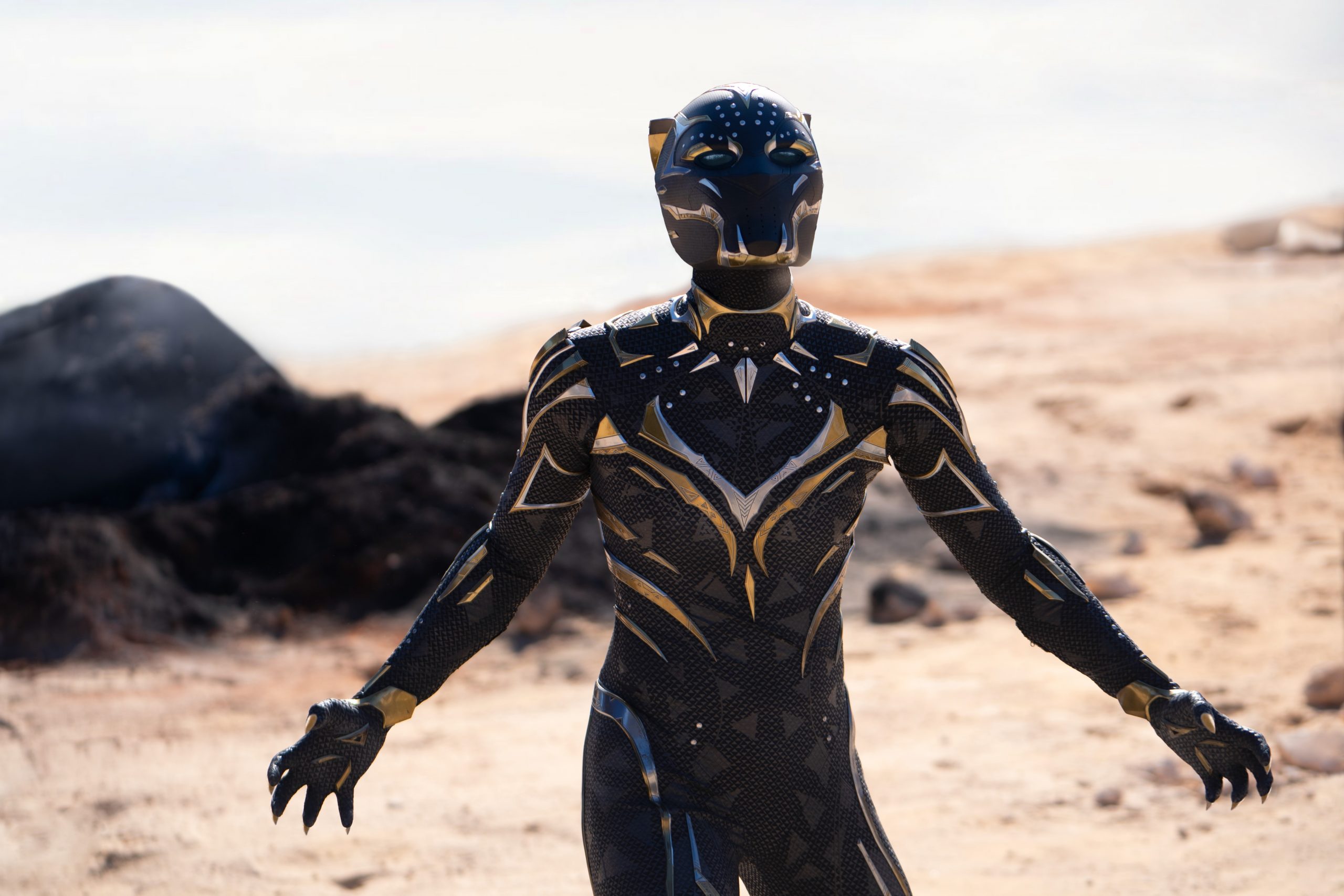 The Battle for Wakanda

Digital Domain’s work on Black Panther: Wakanda Forever focused almost entirely on the film’s finale, which begins in the Atlantic Ocean aboard a futuristic Wakandan stealth ship known as the Royal Sea Leopard. To create the ship’s deck, the filmmakers utilized an elevated, open-air stage, 60-feet long by 75-feet wide, built on a mechanical rig 20-feet off the ground. The full set was then surrounded by blue screens, leaving the rest of the Vibranium-covered ship, ocean and backgrounds to be created by Digital Domain, using Maya and Houdini.

Throughout the fight, the Talokanil continuously scale the hull while battling the Dora Milaje, which led the filmmakers to build a second, vertical stage covered in handholds for the stunt performers to climb. Digital Domain digitally removed the physical handholds, smoothed out the surface of the ship and replaced the stunt performers’ hands with CG versions that appeared flat against the metal. It then animated the hands to include movement. Once on the deck, the Talokanil stunt performers were required to wear shoes for safety reasons, which led artists to replace the footwear with bare CG feet.

To convey the true scope of the fighting, the filmmakers needed to depict an epic battle as the two sides fought to determine the future of the surface world. With a limited number of stunt people available, Digital Domain also created full armies of Wakandans and Talokanil. Using Houdini’s crowd system, the VFX team took the live-action footage and dramatically increased the number of participants from 20 stunt performers to hundreds of warriors across the deck and on the hull, and even more in the water.

The fighting continues until a massive underwater explosion – caused by hundreds of Talokanil hydrobombs – rocks the Royal Sea Leopard. That triggered the physical stage to tilt to a 35-degree angle, causing a mixture of real performers and CG digidoubles to fall to the water below. The inclusion of grenades meant to function under water meant Digital Domain had to rethink, and even re-examine the physics of an explosion. The VFX team had to factor in the lack of oxygen, fire and shrapnel, then replace the outward expulsion with an implosion and subsequent shockwave. 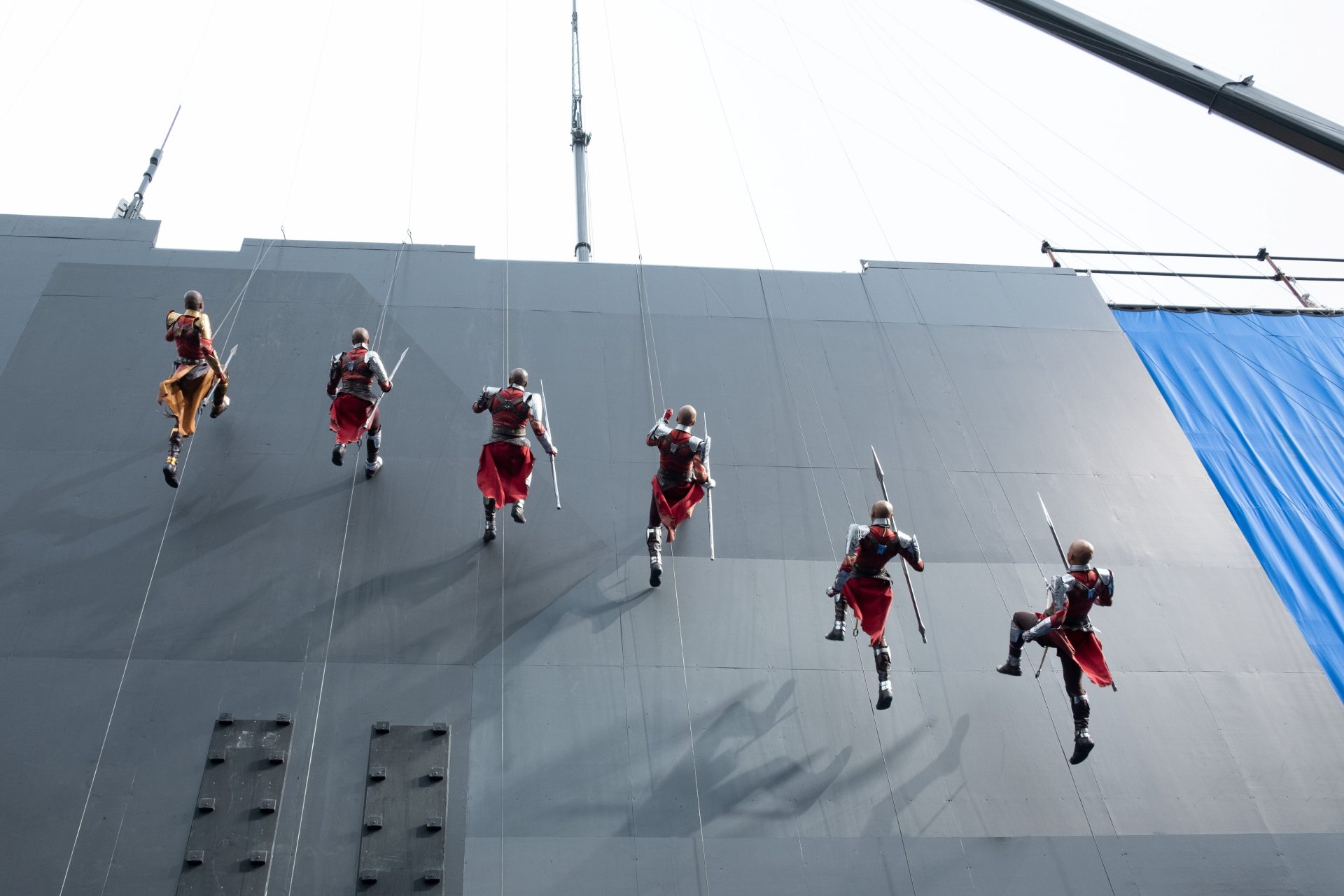 During the battle on the seas, a small CG craft appears in the distance, heralding the arrival of Wakanda’s newest guardians wearing the “Midnight Angel” armor. Working from concept art provided by Marvel Studios, Digital Domain went through several iterations of the two armored characters, ensuring that they had a look that was familiar, but also unique. Once the final look and style was determined, the supercharged Dora Milaje veterans Okoye (Danai Guira) and Aneka (Michaela Cole) are introduced in full armor as digidoubles, flying over the water and into battle.

The fight on the Royal Sea Leopard also features the introduction of another character that will have a lasting impact on the future of the MCU: Ironheart. Early in the film, audiences are introduced to Riri Williams (Dominique Thorne), who acts as a major focal point throughout the film. Her official introduction as Ironheart, however, occurs over the Atlantic Ocean. Building off of 2D artwork from Marvel Studios and a partial practical model built by Legacy Effects, Digital Domain developed the Ironheart armor primarily in Maya, including animations of the character both in the air and underwater.

One of the film’s most important moments arrives when Shuri (Letitia Wright) is introduced as the new Black Panther. The reveal happens in the Jabari throne room shortly before the final battle, and features a digidouble of the new Black Panther dropping from a ship high above. Digital Domain then used another digidouble of the character as she runs and jumps on the hull of the Royal Sea Leopard, easily repelling Talokanil attackers.

Throughout Black Panther: Wakanda Forever, the enigmatic Talokanil are seen in two distinctly different environments, with different looks to match. While in their natural environment underwater, they appear no different from the average human, but on the surface they take on a blue coloration. To create this look, the performers wore full-body blue makeup, and received a handful of digital alterations.

The Talokanil are able to exist on land thanks to a mask over their mouths that provide them with water. It’s a necessary apparatus for a group that lives underwater, but far from practical for performers. That led the filmmakers to track the head movement of each Talokanil performer, which allowed Digital Domain’s artists to add the water masks individually, along with distinctive jewelry unique to each character.

To depict the Talokanil underwater swimming toward the ship, Digital Domain studied the movements of Olympic swimmers and Ironman athletes for reference. With that as a guide, artists were able to create a look that conveyed a sense of ease in the water, as well as enhanced strength that allowed them to move through it faster than an average human. Using Houdini’s crowd tools, Digital Domain was then able to create an entire army of CG Talokanil swimmers.

With the battle at sea raging on, Namor (Tenoch Huerta) arrives and threatens to turn a fight into a slaughter. To depict him shooting out of the water, Huerta stood in a water-filled tank on a wire harness. As he ascended, everything below his neck (including the wires) was digitally removed and replaced. Once airborne, Huerta was replaced with a digidouble, which was then captured by a Wakandan aircraft. As the ship reaches a deserted shoreline, an explosion breaks the craft apart, leading artists to create a CG environment and depict the fiery impact of the wreckage.

To create the superpowered final confrontation, the production employed a combination of digidoubles and stunt performers, who were chosen for both their skills and physical stature. Digital Domain took the live-action performances of the stunt people and replaced the performers with partial or full digidoubles to highlight the superpowered abilities of each character. For Namor, parts of the performer’s legs were also replaced to create the small wings on his ankle that allow him to fly.

Black Panther: Wakanda Forever marks the most recent entry in a long history of collaborations for both features and episodics, including the recent She-Hulk: Attorney at Law and the Oscar-nominated Spider-Man: No Way Home. Digital Domain’s work will next appear in a Marvel Studios’ project with Ant-Man and The Wasp: Quantumania, exclusively in theaters on February 17, 2023.