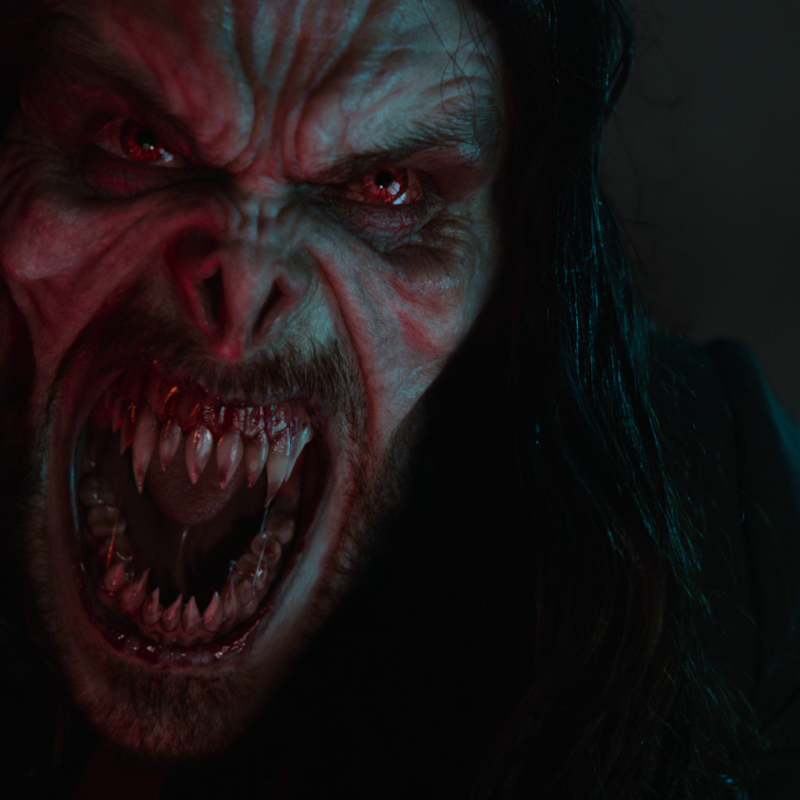 In Sony Pictures’ latest foray into the world of comic-based superheroes, the title character of Morbius is something of an anomaly. One of the most compelling and conflicted characters in Sony Pictures Universe of Marvel Characters comes to the big screen as Oscar®-winner Jared Leto transforms into the enigmatic antihero Michael Morbius. Dangerously ill with a rare blood disorder and determined to save others suffering his same fate, Dr. Morbius attempts a desperate gamble. While at first it seems to be a radical success, a darkness inside him is unleashed. Will good override evil — or will Morbius succumb to his mysterious new urges? His existence is both extraordinary and tortured, which lead both the filmmakers and star to consider new ways to express those emotions, while remaining true to the inhuman, vampiric look of the character. That led the studio to tap into the expertise of the leading digital human experts, award-winning VFX studio, Digital Domain.

“Our digital human team is creating technology that makes it possible for visual effects to expand storytelling in ways that just weren’t possible even a few years ago, while also enhancing the performances of the talent on screen,” said John Fragomeni, global president of Digital Domain. “As the primary VFX vendor on Morbius, we’ve been working closely with both the stars and filmmakers, and that has given us the freedom to really iterate on the designs and push the technology.”

Digital Domain began its work on Morbius by designing the final look for each character’s vampiric forms, with the goal of creating photorealistic, monstrous looks, without restricting them through the use of prosthetics or sitting in a makeup chair for hours each day. Despite having a rough idea of what the character Morbius should look like thanks to his comic origins, the final look still required countless tweaks to ensure everything fit the filmmakers’ vision — from the jagged teeth to the exact pigmentation in the skin. The character of Milo’s vampiric form (Matt Smith) was also an original design, created by Digital Domain.

In Morbius, the advances to Digital Domain’s facial capture software allowed the team to record nearly double the geometry resolution and details used to create Thanos in the Avengers films, another character created by Digital Domain. With the final look of each vampire determined, the stars performed their scenes live on set wearing facial capture markers. Each performer also recorded a full range of facial expressions and movements, in order to create a complete facial geometry for each subject. Following principal photography, several scenes were then later re-filmed on a motion capture stage, giving Director Daniel Espinosa the ability to adjust and fine-tune the monster performances as needed.

With the facial data secured, Digital Domain then employed its facial capture system Masquerade, a proprietary tool designed to produce the highest fidelity facial animation possible, faster than ever before, all without limiting the performer’s on-set movements. From there, artists were able to turn the high-resolution face model into a high-resolution, photorealistic digital character. Artists then made the necessary adjustments to ensure that the CG version of the character was an exact match to the original subject’s performance, including all the nuance conveyed by the award-winning cast. The VFX house also altered the CG faces as needed to adjust the proportions. That included digitally removing and replacing the performers’ cheek bones as needed, to highlight the more sunken look.

Along with the core look of the vampiric characters, Digital Domain also created multiple variations of the character Morbius, highlighting his evolution throughout the film. Five separate versions of the character were seen, from the earliest moments where just hints of the coming transformation are present to a final form where Morbius gives into his rage and unleashes a truly monstrous look at the character. The filmmakers were also able to introduce another unique story element, known as the “bloom,” where the characters are seen to momentarily morph from their human visage to their vampiric alter ego, adding another storytelling tool to the filmmakers’ arsenal.

“Masquerade is in a class of its own, and it gives filmmakers the ability to create better CG faces faster, without sacrificing the nuance and subtlety of the actor’s performance,” said Digital Domain’s Matthew Butler, production visual effects supervisor on Morbius. “It was already the most advanced tool of its kind when Digital Domain’s Digital Human Group developed it to create Thanos, and the version we used on Morbius is at least a generation more advanced.”

Each movement at super speed included a wispy, almost smoke-like trail added by Digital Domain’s artists, with the colors changing based on the clothes the character was wearing. Specific actions from the characters, including hitting others, initiated a “shedding” effect that diminished the speed trails. Characters were initially rendered for animation and review in Redshift, while the speed effects went through Houdini/Mantra. The final renders and lighting were then done in V-Ray.

And despite the fantastic nature of the characters and their ability, the work was all grounded in physics. Digital Domain went so far as to create a set of tools designed to determine the speed, inertia and center of gravity of each character. Characters would jump over incredible heights but follow a set parabola. Super speeds would be reached, but acceleration and deceleration needed to be considered. Characters don’t fly, they glide using currents, air pressure and more. Even a scene involving a CG swarm of bats (created using Houdini) began with research into the flight patterns of bats and birds.

“Although the world of Morbius highlights the incredible powers of the characters, we constantly tried to ensure that everything was grounded in a consistent logic,” said Joel Behrens, Digital Domain VFX supervisor. “The vampiric powers on display are meant to make audiences accept the impossible, but there was a firm set of rules we adhered to in order to make the action sequences look and feel like they belonged in that world. The results are both spectacular and immersive, and we’re excited to see how audiences react.”

Creating the Sequences of Morbius

Along with the work on the vampires, Digital Domain oversaw several action sequences throughout the film, including the container ship sequence that introduces audiences to Morbius’ vampiric nature for the first time, the subway chase that saw Morbius use air pressure to glide through a tunnel ahead of a CG train, Morbius’ prison escape and the final battle at the construction site. Each sequence utilized a combination of practical and visual effects, blending real sets with CG extensions and additions.

The construction site, for instance, was nearly 95% CG, leading to a physical set that made up the top floor. The design for the underground portion of the set was a collaboration between the VFX house and the filmmakers, with the artists basing their designs on existing, real-world underground sites.

To complete the final sequence, Digital Domain also employed virtual production to unite the filmmakers, despite being physically separated. With the general look of the final scene complete, Digital Domain took the CG assets, including the complete environments, and loaded it into Unreal Engine. Using a custom internal pipeline, the VFX team was then able to grant the filmmakers — including the film’s director — the ability to scout the virtual set in VR. Live sessions were conducted at Digital Domain’s mocap stage in LA, with a performer acting as a stand in. Their body capture, along with virtual camera data, were then streamed into Unreal Engine while Espinosa directed remotely. The filmmakers could then examine the scene from multiple views, select camera angles and block out key moments before shooting, allowing for several iterations in a short amount of time. The data was then passed from Digital Domain’s visualization team to the VFX team, and from there they became the final shots in the movie.

Morbius marks the latest collaboration between Digital Domain and Sony Pictures, including the recent Oscar®-nominated worldwide phenomenon Spider-Man™: No Way Home. In total, Digital Domain contributed over 500 VFX shots to the film.

“Academy Award®” and/or “Oscar®” is the registered trademark and service mark of the Academy of Motion Picture Arts and Sciences.